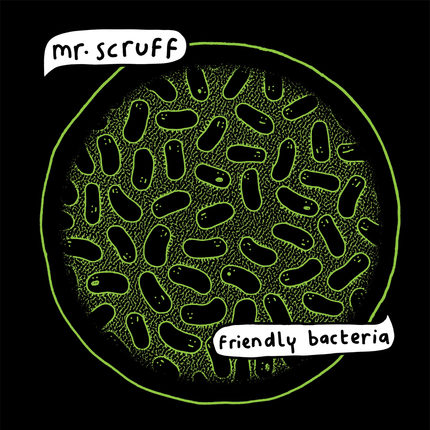 It’s been six years since Mr Scruff last put together a new album. In the intervening years he’s grown older and wiser, and no doubt seen the cut-and-paste electronic landscape he helped shape back in 1997 change almost beyond recognition.

Scruff himself has certainly come back a changed man. Don’t panic - the beats are still present in full, but Friendly Bacteria sees Scruff ease back on the cartoonish loops of old and develop an ear for songwriting backed up remarkably well, primarily by the singing talents of Denis Jones and a couple of other guests.

Pre-release puff doesn’t normally match the final product, but Scruff promised a “tougher, sparser” record compared to his delightful back catalogue. It’s a pledge he’s delivered on fully, that sense of fun slightly dislodged for a more contemplative record.

So things kick off with the wub-wub beat of “Stereo Breath”, our first introduction to Jones’ clear vocals. The song is a delicate evolution, a soundtrack to the scurrying of multiplying bacteria that grace this record’s front sleeve. Following track “Render Me” follows a similar pattern, Scruff once again allowing Jones’ voice to take the reins and lead the dizzying beat down a foggy pathway lined with a simple yet evocative piano riff, like stars glinting in the night sky.

The tempo rarely really rises above resting, Scruff not interested in getting the party started – or soundtracking a Top Gear Ferrari test, for that matter. For its majority the bass is low and slow, burrowing deep beneath the rich textures of percussion, instrumentation and vocals that float over it.

Of the other guest spots, Vanessa Freeman’s graceful performance on “Come Find Me” is more punctuated than accompanied by Scruff, with big kick shots booming out beneath her potent vocal melody. Robert Owens features on the humdrum “He Don’t”, which surprises only in how rote and by-the-numbers it turns out.

This is still Scruff’s record though, yet his solo efforts leave less of a lasting impression. “Deliverance” suffers for lacking the charm that the likes of “Spandex Man” oozed by the bucket load. It blobs along at its own pace, presumably waving hello to the neighbours, and then sort of… ends, without a trace.

Of all the solo tracks, “What” is a long way ahead of the rest with its brassy squeaks (including a fantastically wild closing few seconds) and ridiculously silly bass wobble. I hate to say it, but it’s akin to the old Scruff – messy, loose and tongue-in-cheek – and by virtue of that it can’t help but stand out among the rather lacklustre accompanying solo efforts.

Jones brings out the best of this new-look, new-sounding Mr Scruff. His steady vocals push Scruff to the back, where the reliance on weird noises and bitty loops is relegated beyond concern. The combo’s tracks are slick, suave and spine-tingling and perfect for a mellow moment. But elsewhere, this mature and sensible Scruff has come at the cost of that personality that you associate with the man.

In this day and age of half-shaved hair dub kingpins, it’s difficult to see where Scruff stands on the landscape. Friendly Bacteria is the sound of artist easing back into his chair refusing to play the fool to get people’s attention and, unfortunately, the majority of it just passes by like a breath of wind.