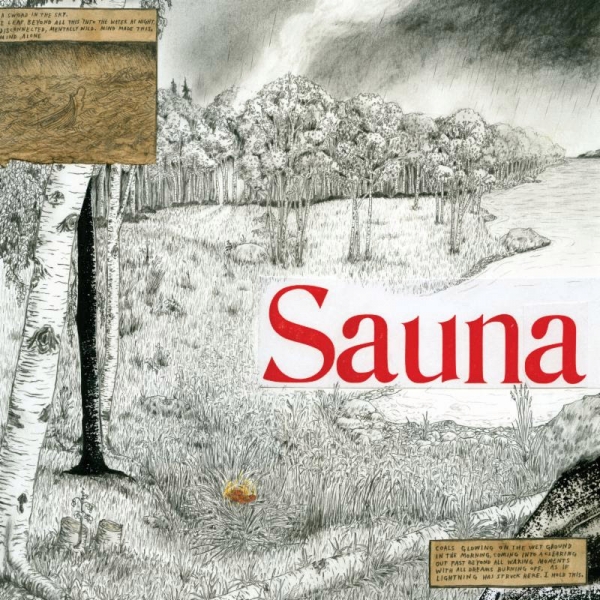 Toward the end of last year, Phil Elverum published an essay to his blog entitled “life/project explanation”, and frankly it’s as good an introduction to his works, both as The Microphones and as Mount Eerie, as you’re ever likely to find. Elverum’s music – and his writing, and poetry, and photography – goes beyond the clichés of “personal” or “confessional” artistry; it is a fully fledged aesthetic and ontological exploration, a continuous phenomenological examination of what it means to be alive, what it means to be in the world, what it is, simply, to be Phil Elverum. In the aforementioned essay, he explains why his latest album is titled Sauna, writing that “like a sauna, music can be an almost mystical short-circuiting of our assumptions that we self-inflict in order to see the world with fresh eyes, to clear away the gunk, both mentally and physically.”

The title track from Sauna, then, opens the album with ten minutes of a single sustained organ chord. Over it we hear cymbals fizz, a kick-drum distantly rumbling, a guitar roaring bursts of feedback and, most interestingly, the hissing of actual steam recorded in Phil Elverum’s parent’s sauna. “Sauna” is an engulfing, totalising experience, refamiliarising us with the very particular universe of Mount Eerie after an absence of two-and-a-half years, since the 2012 releases of Clear Moon and Ocean Roar. During the song he sings: “I don't think the world still exists/Only this room in the snow.” By its end we are cleansed, ready to believe that the world we knew no longer exists, ready to see it all with fresh eyes, and to hear it with fresh ears. This is a songwriter who refers to his LPs not as albums, but as “album-length song-worlds,” and for all that that might seem pretentious, it’s also perfectly accurate, because his music doesn’t play by the same rules as anyone else’s, and his intention with his albums is always to create a fully fledged word into which we slip every time we listen to them. To that extent, we need to approach his music with different expectations.

We are most certainly back on Mount Eerie’s distinctive peaks, and the landscape is familiar: ruminations on “the natural world/and whatever else it’s called,” invocation of physical sensations and abandoning the physical world “to show that I am beyond this animal form,” and extended discussions about being “disconnected and young” abound, but Sauna refuses to be the sound of Phil Elverum standing still and repeating himself. Where the Clear Moon/Ocean Roar diptych was conceived of as a piece, both thematically and musically, Sauna is much looser, more diverse, and is arguably all the better for that. Ocean Roar in particular suffered underneath its own tremendous weight and overbearing darkness as it sought to create a single, oppressive atmosphere. Sauna, on the other hand, is painted with a broader palette, making much greater use of contrast.

Though the synthesisers which dominated his last two records are still present, Elverum gives much more space to his acoustic guitar, and the whole record feels a lot more open and inviting; indeed, by Elverum’s standards, this is a positively accessible record, though the operative phrase remains “by Elverum’s standards”: Sauna is, after all, a record that contains two 10 minute-plus drone tracks. His production and mixing style, which, since at least 2009’s Wind’s Poem, has skewed toward a noise-led, bass-heavy wall-of-sound effect, is lighter of touch and more expansive here. The gorgeous two-part harmonies of Ashley Eriksson and Allyson Foster had a role to play on previous Mount Eerie albums, but they always had the impression of being shimmers of light through the darkness; here, such as on “Dragon,” they are given the lead, fully illuminating the album’s first half.

A cinematic technique favoured by Alfred Hitchcock was to come out of a suspenseful scene set in darkness straight into a brightly lit external image, with the effect of at once startling and relieving the tension in an audience. Much of Sauna is built around a similar idea. The dense and brooding thirteen-minute-long drone of “Spring,” for instance, is followed by the quirky, largely wordless Nils Frahm-esque piano piece “Books.” Superficial listens might suggest a set of only loosely connected songs more akin to 2008’s Dawn, or even either of Elverum’s Song Islands collections, than either of Sauna’s direct predecessors. Far from being incongruous, however, the undulations in tone lend Sauna a beguiling sense of rhythm, a tempo that ebbs and flows across the record, maintaining interest so that its fifty-five-minute runtime never feels long.

Lyrically, Elverum performs a similar feat of contrasts, moving so naturally from grand metaphysical abstractions about being (“life is a small fire I carry around”) to quotidian observations about the minutiae of existence (“I make a coffee while looking out the window and notice that I can’t remember when – or if – I woke up”) that the two become absolutely equivocal, that there is no discord at all between the proximity of the two. “Planets” is a ninety second guitar-led track whose central metaphor “the two of us are planets/crashing through separate lives” forms the foundation for Elverum’s musings on the impossibility of ever truly knowing another human being; it is followed by “Pumpkin,” a Bill Callahan-esque semi-spoken acoustic number about seeing a jack-o’-lantern smashed on the floor in the aftermath of Halloween. This mixing of register and tone could run the risk of making everything seem equally trite, but Elverum sees only different ways of portraying his own situation, so fruit-base folk becomes as profound as solar-system spanning rock.

A few years ago I saw a comment under a Mount Eerie track on YouTube which simply read: “Thanks, Phil, for making me feel sane.” The sentiment might be somewhat drowned under the tidal wave of people posting the same thing on Ed Sheeran videos, but it stands as perhaps the truest critical evolution I’ve ever read of Mount Eerie’s music, or at least of what that music means to me. By his own confession, Elverum has no ultimate goal with his work “other than to explore [his] own mind,” but in so doing he imbues his music with his very particular worldview, gives the world his own unique brand of sense and meaning. Superficially, Sauna is possibly the easiest, most accessible way into Elverum’s world he has released since he ditched The Microphones moniker, yet the concepts and themes explored remain undiluted, and the album’s complexities have as much to give as you are willing to work to take away. For the first time in the history of the internet, a YouTube commenter got it right: the greatest compliment to be paid to Mount Eerie’s music is that, for a few brief minutes at a time, it can make you feel utterly sane.