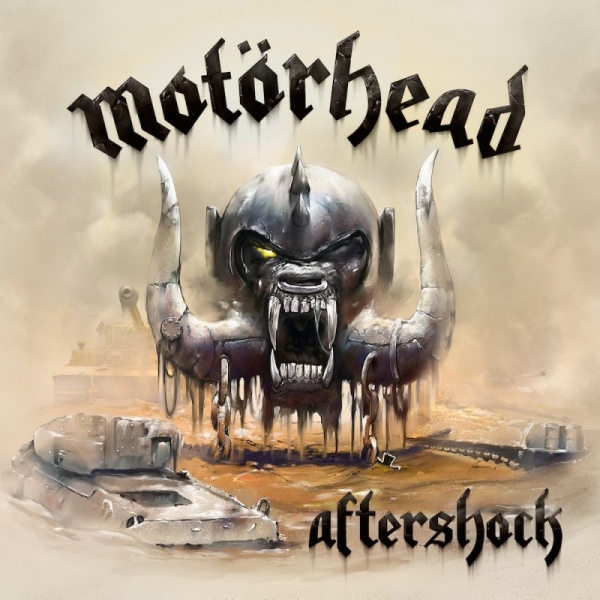 For those old souls who were seduced by the speed-happy, grime-slicked rock n’ roll of Motörhead in their heyday, but have lost touch since, Aftershock represents a fascinating opportunity to explore just how much of their trademark sound has changed over the years. The timing for a retrospective glance couldn’t be better since the trio of Lemmy Kilmister, Phil Campbell and Mikkey Dee, who currently form Motörhead’s longest-standing partnership of 20 years, have chosen album number twenty-one to reconnect with some of that old school bluster that has made them the legendary act that they are.

The first thing you’ll notice, when comparing the old with the new, is that the production values are through the roof. There are more layers on this thing than a prize-winning onion. Guitarist Phil Campbell gave us all a heads-up on this fact when he claimed in a recent interview that Aftershock definitely had “a growl to it” (“I slammed a load of guitars on there, I didn’t tune differently but I did go for a dirty sound”, he imparted). The enormity of all those tracks competing for equal power has helped Lemmy, now singing with reduced echo, to nestle within the band rather than dominate. His vocal may be a little flabbier, delivered at a lower register and somewhat less vitriolic, but it still comes with plenty of snarl and with a whole bag of gravel poured in. He sounds almost Joe Cocker-esque at times – a fact which shows up to greatest effect on their party-piece “Last Woman Blues”.

Their songwriting has, in keeping, slackened a little from their “live fast, die young” approach, yet Aftershock doesn’t balk at the opportunity to occasionally bare its teeth – a definite sign of improvement over some of their more recent efforts. By turns, it maintains a happy balance between the rough and the smooth offering up a more eclectic mix of speeds to tune into. It’s definitely a little bluesier with sharp stabs of rock n’ roll thrown in as opposed to their usual fare of greased-up biker grind. Their lyrical ethos hasn’t strayed far but there are less of those quintessential gritty, hammer-down powerplays. The end results have produced songs like “Dust And Glass” – a fine example of a band with their seats fully-reclined and with one wrist on the steering wheel. However, fear ye not. The classic Motörstomp and skidding Motörgrind rhythmic structures are still present and correct – “Queen Of The Damned”, with its thundering bass, is a grown-up “Ace Of Spades” whilst “Going To Mexico” has all the “lads on tour” rock and rumble of a real oldie like “Stay Clean”. What we’re left with is a band that has moved away from that early period Hawkwind-esque scratched-up, scrawling live-geared sound that marked them out as heroes, to one that is capable of doing it all and giving us a crisp, rich-sounding and well-defined recording that will slay when they hit the stage.

Considering Motörhead have been on slow-down over the past couple of years (Lemmy’s long-term health problems recently resulted in him being fitted with a defibrillator), so a record of this quality is quite a shock to the system (pun intended). “Coup De Grace” bristles with energy, the bass ramming through into each grungy chorus whilst the hectic drive and fiery riffing of “End Of Time” sends us kicking and screaming into the monstrously joyful rock rhythm of “Do You Believe”. Wonderfully, “Lost Woman Blues” takes the pace back and piles on the smooth groove as Lemmy and Phil treat us to the ultimate in cool whilst “Silence When You Speak To Me” sees Phil laying on the wild solo and ten-foot chug whilst Lemmy stares us out and tells us just who’s boss – “You may say no but not to me / Silence, Silence”.

Essentially, what Aftershock offers is a thoroughly enjoyable romp over fourteen solid tracks. Consistently solid, the album starts strong and finishes stronger as stonkers like “Lost Woman Blues”, “End Of Time”, the sweet boogie of “Crying Shame” and the swagger of “Keep Your Powder Dry” are big and ugly enough to keep you coming back for more. Over recent years, there can be no doubt that their albums have all had their weaknesses with only Inferno really able to stand shoulder to shoulder with classics like Overkill, Ace Of Spades, 1916 and Bastards. Aftershock may not have come from the same dark hole that spawned those bad boys, but as a statement of intent, it’s right up there with them.