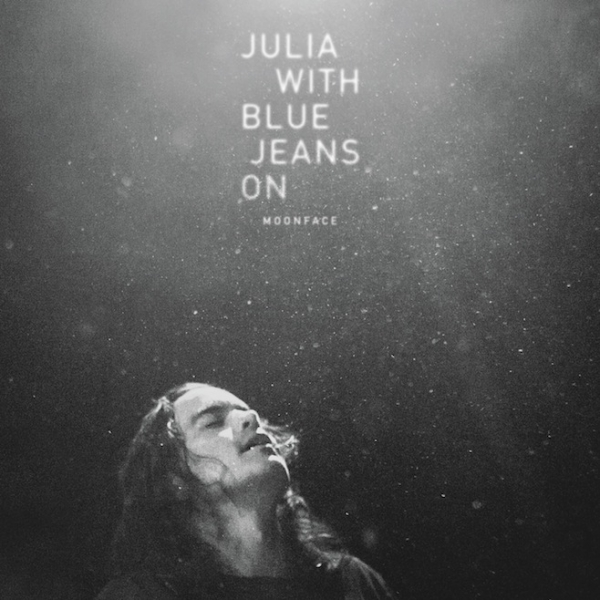 Spencer Krug is a man with many faces; widely revered as a member of cult darlings including Wolf Parade, Sunset Rubdown and now Moonface – a solo project which is beginning to stake an increasingly valid claim for being among the Canadian auteur’s best work.

Moonface has already been through a few stylistic shifts, in keeping with Krug’s fervent imagination and matching work ethic. His introductory EP’s experimented with crafting quirky little songs from limited resources, notably his Marimba and Shit Drums EP which set a fairly obvious lo-fi precedent. Then he hired in the support of a Finnish krautrock group to provide a towering backing for the proper full length, the Moonface and Siinai LP Heartbreaking Bravery in 2012. That album was a slow and brooding but epic collection of moody melodic rock which constantly scaled the kind emotional heights normally reserved for his more insular lo-fi work.

Julia with Blue Jeans On goes straight back in the other direction scale-wise, being crafted from nothing more than piano and Krug’s distinctive vocal; it is remarkably intimate stuff but strangely sounds no less grandiose than he did the backing of a full band. He uses rich lugubrious piano lines and spacious creeping production which allows his pained voice to stretch to maximum emotional impact. With these simple tools has crafted an enchanting record of real power, which flickers between intimate warmth and cold distance.

The sprightly melody which opens the album on “Barbarian” is so jovial that it could soundtrack a blue skies Pixar trailer, that is until Krug announces his presence with the line “you are crying, for sure” and clarifies that this will not be ten tracks of feel good Randy Newman-esque piano pop. Though Krug’s lyrics are similarly matter of fact – going on to proclaim “I am a barbarian….sometimes” and throughout the 10 songs his economical use of language creates incredibly vivid imagery. On “November 2011″ he begs “set fire to these computers” or later he cries “We will find a spot in the sun where we will let our hearts run wild”. His words are not without some wry humour though, it’s hard not to be tickled by the title tracks claims “I had been spending a lot of time in my expensive furs when the question first occurred to me”. The songs here are by turns forceful and incredibly delicate, showcasing the remarkable range of his simple setup.

This is what the album is about – getting back to basics, back to the simple beauties of life which are too often taken for granted. From the simple image of a woman in denim at the bottom of the stairs which inspired it, and is regaled in the title track, to much bigger things, Krug seems intent on getting to the core of things; music, feelings, beauty – and in some senses he actually lives up to that aim – with the songs reminding of the enduring power of the piano and the right clutch words. Like the image which adorns the cover, sometimes it’s good to just take in the wonder of the simple things, and the modest but pensive charm of this album is well worth getting lost in.