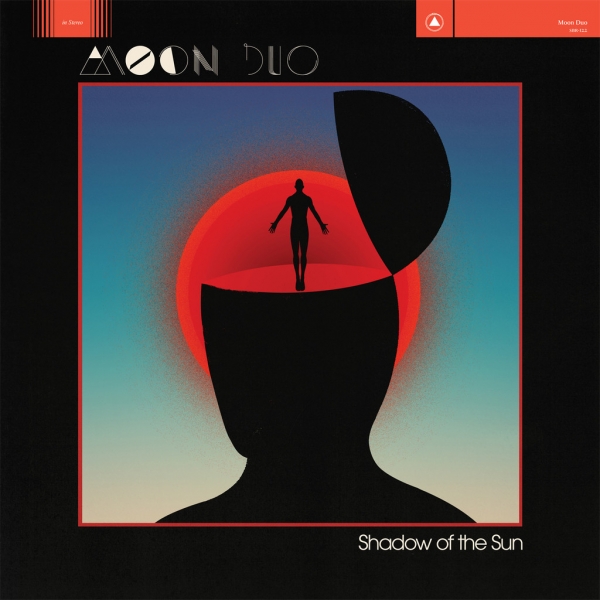 Having guided his main mothership Wooden Shjips steadily across the plains of psych-tinged rock since 2006, Erik “Ripley” Johnson decided to form the side launching escape pod of Moon Duo with his partner Sanae Yamada as an outlet for his more pharmaceutically driven krautrock side. Five years and five albums later, Ripley has landed with Shadow of the Sun, and it sees Moon Duo arriving at a place that was possibly beyond even Ripley’s expectations when they began the project.

Last year’s Live At Ravenna, the band’s sole live album, obsessively released to simultaneously announce and showcase the recruitment of drummer and newly permanent member John Jeffrey, offered a glimpse of the type of construction that lies at the heart of Shadow of the Sun. The well worn drum machine of their previous releases has been firmly cast aside and the addition of Jeffrey has transformed Moon Duo from a band relying on a restrictive box of wires to provide their beats, to a fully realised, resonating machine of flesh and bone. And this seems, in many ways, to have set them free.

Moon Duo’s tendency to jump head-first into elongated instrumentals and wah-heavy guitar solos hasn’t diminished, but the ability to indulge their improvisational side has been increased exponentially on Shadow of the Sun, and the arena of psych-blues rock/wig-out is where Moon Duo operate best.

Album opener “Wilding” sets the tone for the album by way of a full on assault of cyclical riffs and manic shakers exploding into view like a turbo driven 13th Floor Elevators. Ripley’s breathy vocals echo low in the mix infusing the track with a tone that’s at once ominous and exhilarating - the opening credits to a spooky Hammer horror show flickering across a late night party.

“Free The Skull’ sees Jeffrey’s driving stick work steadily underpin Yamada’s steadfast Keyboard riff which is among the most melodic moments on the album, before Ripley’s flange drenched guitar steadily builds on the foundations and creates a tower of psychedelic swirl.

But the crowning achievement has to be the final coupling of “Ice” and “Animal”, the two songs working as a siamese twin of slow moving dirge and racing, feral beast. “Ice” fades in with a close, claustrophobic pounding and resonating, hypnotic refrain that sees Moon Duo riding a seven-plus minute wave of ethereal rock.

At just over 2 minutes, “Animal” is by far the most condensed song on the album, but its position at the end of Shadow of the Sun serves as a short, sharp shock that echoes the musicality of its predecessor, only doing so by way of a relentlessly direct, rapid fire explosion of fuzzed up guitar and pounding drums. It’s a muscular, exhilarating and slightly scary experience, but one that makes Shadow of the Sun a tippy, interstellar journey all the more worthwhile taking.