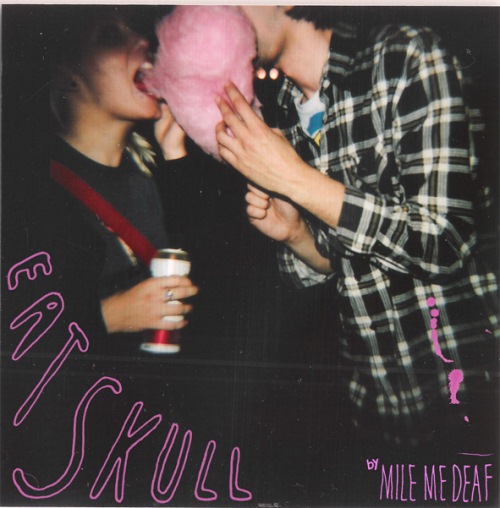 Wolfgang Möstl is the genius you’ve never heard of. No matter how hip with the buzz-blogs you are, there’s a good chance the Austrian lo-fi noise-fuzz indiepop scene was missed, which is almost criminal. As the bedroom maestro behind Mile Me Deaf, Möstl has been releasing DIY fuzzpop albums as free downloads, CDs at gigs and floppy discs (vintage chic 2015 trend spotters) for around a decade, and they’re brilliant.

If Mile Me Deaf were from Brooklyn, or on Slumbaland, we’d be clawing at the release of Eat Skull like Hipster Runoff’s Carles after Samantha Urbani’s tit tape. As it is they’re Viennese. Now, the only thing anyone knows about Vienna’s music scene is Art Brut, Rotifer and The Lovely Eggs probably play there, and that bloody song. However, in reality the Austrian capital has a lo-fi scene groaning with beautiful guitars and jangly vocals, based around Siluh Records, of which Möstl is the golden boy.

Eat Skull is his first official release as Mile Me Deaf, his previous DIY releases merely being an idea-generating side project veering from Lawrence’s disco cynicism to lo-fi Conor Oberst yelps. His main band, Killed By 9V Batteries, release the scuzzy ’90s riot noise of Urusai Yatsura and Shellac, while more recently his five piece, Sex Jams, are the bastard son of Dananananaykroyd and Prolapse. What makes Eat Skull different from Möstl’s other work, however, is its melodicism and breeziness.

Yes, there’s still a shitload of his trademark feedback, especially on ‘You’re A Walking Maze’ which could be, er, Mazes, but ‘Troubles Caught’ has a ’60s slacker harmonica hook with Buffalo Tom melodies counterpointing its Half Japanese distortion. ‘Wild At Heart’ likewise has the laid back feel of Guided By Voices chillaxing with a My So Called Life box set . Cloud Nothings and Spectrals aim in a similar direction, but neither come close to encapsulating the variety of ’90s alt the way Eat Skull does. Listening to it feels like a bibliography of alt-rock ’89-’97.

It’s hardly surprising; all the time Möstl has spent on his own with a laptop and a guitar has been in preparation for this masterpiece. It’s purposefully constructed, as though an inevitable conclusion to a noise-pop doctorate. That’s not to say it’s soulless or unauthentic. On the contrary it’s a heartfelt homage. Skulkers’ Ranaldo squalling is deployed only when it’s needed, to propel its sprightly pop to a new level of awesomeness without milking the well-trodden quiet-loud paradigm. Equally, Heels Come Naturally’s My Bloody Valentine slant is only briefly sanctioned during the riff drive, in a classic case of less is more.

From the sparse distorted metronome of ‘Faux Trials’ to the fuzz-gaze of ‘Camera’ there’s evidence of a true cult icon emerging. Although Eat Skull has the originality of a Mills and Boon romp, it is incredibly rare to see someone as prolific and excited as Möstl create such a stimulating record, which constantly surprises. Indeed, opening track ‘Leaking Stuff’ even starts with a lo-fi Girls On Film drum intro before suddenly becoming an ethereal glide with a chugging slacker drawl. It’s everything that ever was, and forever will be great about guitars.

Eat Skull is a magnificent outsider record, brimming with devotion, which will allow Möstl to establish himself as an alternative force. It refuses to sound nostalgic, instead it reinvigorates a genre often carelessly manipulated. By officially releasing Eat Skull he has upped his game, allowing Mile Me Music to come out from the bedroom and into the forefront and his main outlet for which should be thankful. It might be about time to check out those Austrian festival listings.