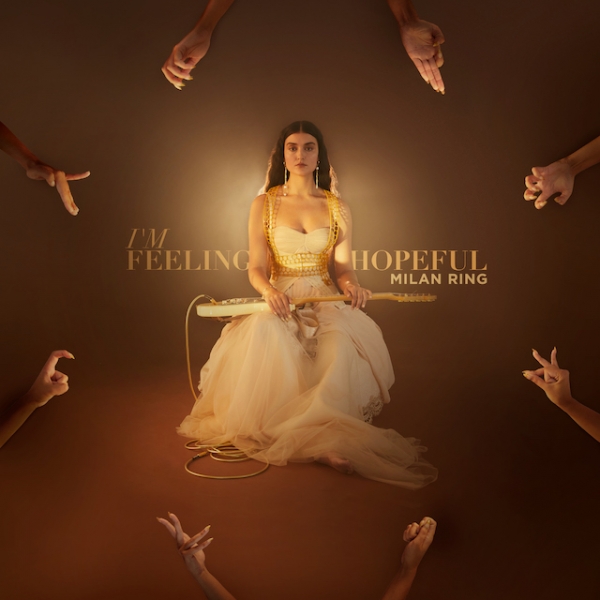 Honesty is the best policy, right? It’s something that’s assisted Sydney-based rising star Milan Ring in creating her authentic and enrapturing debut album I’m Feeling Hopeful. An admirable focal point, Ring explores themes varying from love to depression, hope to self-sabotage and even the brave vulnerability of desires to addiction.

Carrying a genre that’s hard to pigeon-hole, the album moves with fluidity through laid back neo-soul numbers down to darker R&B creations, and it’s this musical versatility which re-affirms Milan Ring’s rising star status. Captivating first track “Hide With You” showcases the wonder of love through chilled beats with occasional gospel chants, acquiring similar features to Aussie predecessor Tash Sultana. And the same warmth is pictured later on in “Keep Me Safe”, a constant sunny guitar riff featured within is anything but repetitive, as the chorus brings in angelic harmonies declaring “Just hold me in your arms / Keep me safe from harm”.

Coming from a place of trauma and self-destruction, sultry yet poignant “Pick Me Up Feat. Jean Deaux” is an open book into the devil that sits on Ring’s shoulders, telling her that her best friend lies in the bottle. One of the more sinister songs on the album, Milan Ring echoes “I didn’t come out to play / I just came out to get drunk”.

Reflecting on other dark but defining moments, “Dreaming” recalls isolation in the darkest of times after seeking freedom in all the wrong places. Layered with a prominent guitar riff and bassy drums, it captures the crippling angst and fear that lives in the mind of someone facing addiction.

The creative pulse that runs through Ring’s body is captured fully in the music she creates, from her magic voice down to her epic guitar skills. Most people would think that’s enough to craft a great debut album, however, Milan Ring pushes her boundaries by incorporating various featured rappers to create admirable depths to certain tracks. Tropical and Cuban vibe “BS Feat. Che Lingo” is bouncy with funk driven bass, and duels perfectly between Che Lingo’s rants on egotistical maniacs, whilst Ring’s hypnotic voice hums an every day mantra “I gotta deal with the bullshit every day now”.

Entirely mastered by herself, capturing important themes and moving through different genres as if they’re going out of fashion, Milan Ring’s debut album is an enthralling listen.