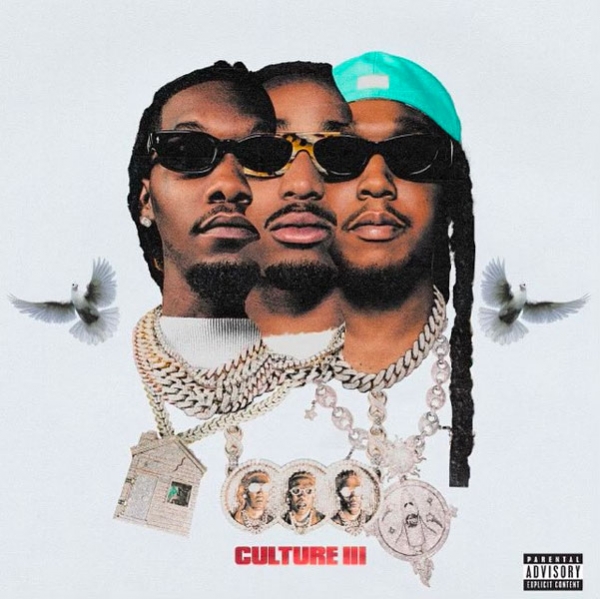 Migos are back. With the third installment of their Culture albums, the Atlanta trio come through with an hour and fifteen minutes of trap bliss. The group has been all over since Culture II was released in 2018, releasing solo projects and being the personalities that made them household names in the first place, but Culture III is a sharp turn away from the self-indulgent length and vibe of its predecessor.

Okay, maybe that’s a stretch. Nineteen songs and an hour and fifteen-minute play time is a little self-indulgent, but what would a Migos project be without that? With features from Drake, Cardi B, Pop Smoke, Justin Bieber, and more, Culture III is filled with infectious beats, stank-face-inducing hooks, and the closest race for “Best Migo” in a long time, so a little self-indulgence is earned.

The beats and bars of Migos are known by the public at this point, and the group does well to hold true to this sound without using it as a crutch. “Avalanche”, “Type Shit (feat. Cardi B)”, “Malibu (feat. Polo G)”, “Modern Day”, and “Need It (feat. NBA Youngboy)” are standout tracks from the project, and not a single verse misses the mark. Even with four people on some of these songs, nothing seems crowded. No verses seem attached to the end of a beat to appease someone who might’ve felt left out.

It must be said that this album isn’t perfect. It’s about fifteen minutes too long and there are misses: Justin Bieber turns in another corny hook, Future continues his rough stretch of verses, and the back half of the album drags. But these don’t really end up mattering. Even if there wasn’t enough thought put into the structure of the album, you leave the album excited for when you hear it at the club more than you think about what could’ve been done differently.

This album isn’t just the return of Migos, but will likely be remembered as an album that marks when the world reopened, when we could actually celebrate music together. Like Culture and Culture II before it, Culture III is that celebration music. It may not be the cultural moment those albums were, but it is the welcomed return of three of the most entertaining rappers in the game.