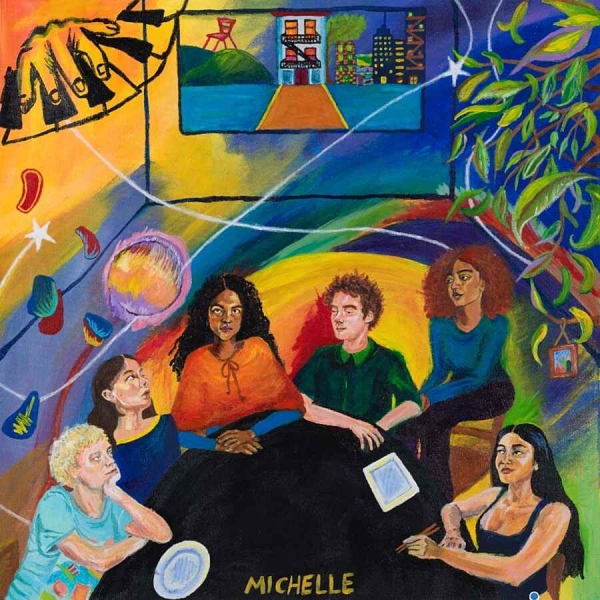 MICHELLE’s AFTER DINNER WE TALK DREAMS is an exploration of what our friends give to us, and the beauty in six different individuals finding a home in one another.

Their music flows like conversation, shifting from acoustic to electronic to playful to sincere; but it’s still pop music. The sort of pop music that seems stored in cupboard somewhere until you find it waiting for you. The smell of red wine, sautéed garlic, and cigarette smoke drift the same, and their only real time of interaction comes when we gather. When we sit down and eat with those we love, we come together and let go of the bullshit thrown our way the previous week. That's exactly what MICHELLE's second album AFTER DINNER WE TALK DREAMS feels like, as the collective continue and refine their collaborative efforts.

With a change in season close, this feels like an album for those first few days of spring, as you reckon with what the dark parts of the year showed you and what these extra boosts of serotonin might do. Harmonies flitter in and out of frame as the four female vocalists of MICHELLE (Sofia D’Angelo, Layla Ku, Emma Lee, and Jamee Lockard) develop their craft even more since their 2018 debut album HEATWAVE. As talented as they are at treating their voices like instruments, though, there’s no overuse of it. It’s not the only thing MICHELLE do well, and they don’t need to lean on it. Take the latter half of the album, for example; the percussion and variety of bass sounds that producers Charlie Kilgore and Julian Kaufman layer in these songs is as musically impressive as anything the collective has put out to this point. MICHELLE will always be a pop group, but the tension in this slate of songs gives a different air to the other flowery elements in the production. It’s a product of six people developing individually and collectively.

I sound like a guy who just found out about bands, but part of the appeal of MICHELLE is how the group is at the center of everything; and that’s refreshing. Their marketing packages everyone without preference, and the music they make seems like the kind you make out of love. Band mates become friends out of sheer proximity, but MICHELLE shows the beauty that comes with discovering life by committee in your early twenties. AFTER DINNER WE TALK DREAMS is a dinner-party album that immediately captures the importance of gatherings like it. We only find our best in each other.