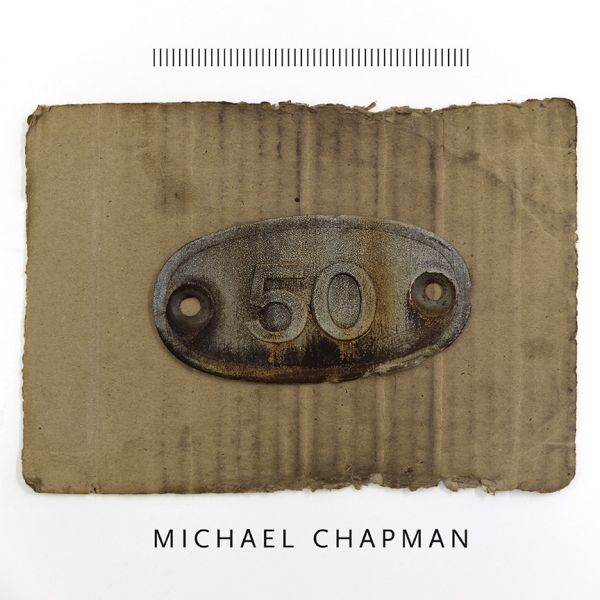 Few musicians hold off until they’re well past the official retirement age before creating their masterpiece. Michael Chapman may just have done that with the spellbinding 50, named in recognition of both the number of years the 75-year old has frequented the road and the approximate number of releases in his marathon back catalogue.

The Leeds-born guitar alchemist and songwriter hasn't always had the smoothest of rides. Promising early embers of mainstream success - much-feted early albums such as Rainmaker (1969) and Fully Qualified Survivor (1970), almost becoming Elton John's guitar hero in residence during his hit making pomp - gradually cooled into a life deep in the musical margins. Approximately half of the cuts on 50 are reworkings of tunes that made their debut on albums released on miniscule labels for even smaller amounts of fanfare during the 90's. Meanwhile, his virtuoso, genre-blurring guitar skills (Chapman's by turns melodic and abrasive acoustic playing really does resemble a one man rock and roll band, to borrow a title from an equally wilful and individualistic contemporary, Roy Harper) and stoic, road-worn songcraft turned Chapman into a cult hero amongst a certain brand of discerning American musicians and music-lovers: Thurston Moore, Hiss Golden Messenger chief MC Taylor, William Tyler and Ryley Walker have all cited Chapman as a key influence.

If lively opener "Spanish Incident" has a slight whiff of a band trying to figure out how to fit in with the idiosyncratic style of the star turn without trampling all over it, perhaps a bit too mindful of how Chapman's classic 70's band albums ala Wrecked Again (1971) were constructed, 50 gets stuck into a hypnotic groove as soon as Chapman's intricate yet muscular acoustic guitar, honed into a truly potent weapon during countless solo gigs, is parked at the center of the aural picture, the imposing and immovable lodestar the rest of the musicians navigate their contributions around.

That said, 50 is more about showcasing Chapman's often overlooked talents as a songwriter than furthering his reputation as a master guitarist. As winningly loose and in the moment as the album sounds, there's little what could be described as noodling or jamming on these 10 unhurriedly evolving yet tightly constructed tracks. This adds power and allure to the odd bits of soloing, such as the flurry of dejected notes during the loose-limbed, jazz-tinged ending to "The Mallard", an impossibly lovely, tender yet tough anthem of loss, regret and the compulsion to keep moving on. Improbably, the ghostly "Falling From Grace" is even more moving with its resigned recounting of loneliness and loss; the song's sense of opportunities that have long since disappeared and dissolved is perfectly complimented by a cascading keyboard riff that could well pass off as the sound of tears falling down.

Chapman's gruff voice has occasionally felt misplaced on his more refined releases, but his weather-beaten tone finds an ideally sympathetic setting on these earthy, uncluttered yet richly textured cuts. "Memphis In Winter" - another peak on an album not exactly short of highlights - would most likely sound immense in any setting, but its nightmarish trek through a city riddled with fear, poverty and danger sounds all the more powerful when delivered in tones that suggest the singer's spent a night or two shivering by the cold, cold river the lyrics refer to. The dry chuckle that follows an icy line about how Jesus isn't around to save anyone in this town alone is more expressive than hours of technically faultless textbook singing. Elsewhere, St John rounds off melodies Chapman's half-whispered delivery may not reach to.

Throughout 50, themed around hard travelling, trouble brewing and time never ceasing to fade away, there are references to the sound of Gunn's recent solo albums (the desolately beautiful "That Time of Night"), the stark and strange country-blues rambles of the Black Twig Pickers (the banjo-wielding trek through an apocalyptic landscape on "Sometimes You Just Drive", inspired by a drive Chapman took through Scotland during the 2015 flooding), Appalachian hoedowns ("Money Trouble"), ambient and minimalistic aspects of Post-Rock experimentation ("Navigation") and the proud American and British traditions of folk- and blues-derived fretboard exploration (the instrumental "Rosa Pena"). Yet the different strands cohere into a seamlessly unified, thoroughly inspired and profoundly moving record that never really sounds like anyone but Michael Chapman.

"I'm still looking for my reward," Chapman states on "Sometimes You Just Drive". Easily strong enough to act as an ideal entry point to Chapman's extensive discography, and quite likely the veteran's definitive statement, 50 deserves to reap all possible plaudits.