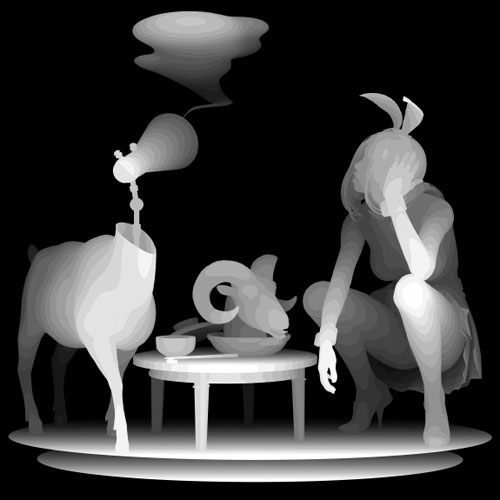 Dayve Hawk, better known as Memory Tapes, is neither man nor machine but a hybrid. His debut album, Seek Magic, was characterised by the likes of breakout track ‘Bicycle’. The songs were carried by a simple, emotive lyric – but with ice cold dance melodies executed in a more mechanical, calculated manner. Chillwave in places, it was almost too chill to be legal.

On followup Player Piano, Hawke’s emphasis has moved away from pumping disco beats towards more instantaneous pop melodies. The only burning core remaining from Seek Magic is the atmosphere of protective texture that gives space for such melodies to roam.  While Player Piano is still layered in multi instrumental glee – with the over bearing club dance styles now orbiting away – there’s a much more balanced aura.  Melodies jet stream with more clarity and Hawk’s voice resonates clearer as the smoke of Seek Magic disintegrates.

This is certainly the case with ‘Wait in the Dark’, which bears cosmic melodies similar to those found on Granddaddy’s Under the Western Freeway. Bubble gum synths reminiscent of ‘A.M.180’ sugar rush through the entire album whilst Hawk sings: “So what did you want me to say? / I just don’t feel like that anymore”.

As a master of contrasts, Hawk’s otherworldly voice eclipses the natural emotions he sings. In ‘Yes I Know’ (“We are far apart from everyone that we all lost and I just haven’t got the heart”) he sounds almost ghostly. It’s with the carnival fiesta of ‘Sun Hits’ that we get more flares of saccharine twee (“When we wake up it’s a compromise / I hear you crying when my eyes close by themselves”) as Hawk falsettos, Bee Gees style. It’s with such close-to-home themes that, even at his most ethereal, Hawk asserts his humanity.

Crashing back down closer to home, we are reminded of what made Seek Magic so good: textures of instruments traversing as equals alongside Hawk. Indeed with the likes of that record’s ‘Green Knight’ and ‘Bicycle,’ the percussion, keys and guitars seemingly massaged Hawk, piecing him together.  ‘Fell Thru Ice’ – in which the guitar trickles down in an echoing wave – is a reminder of such nostalgic times. Hawk’s voice forms a platform for each instrument to latch onto, their safety net being a catalyst to move forward.

It’s a gentle reminder that whilst he’s placed a higher emphasis on the shimmer of thinner melodies (as in the salsa burn of the Friendly Fires/Yeasayer-like ‘Trance Sisters’) there still is a bit of Seek Magic in him. Taking his old rock roots with Hall Social into consideration, Player Piano shows Hawk to be a great forward thinker, building on the success of his debut. The constant cataclysmic shift between the honey suckle and bitterness of Player Piano makes it a wonderful bittersweet symphony.