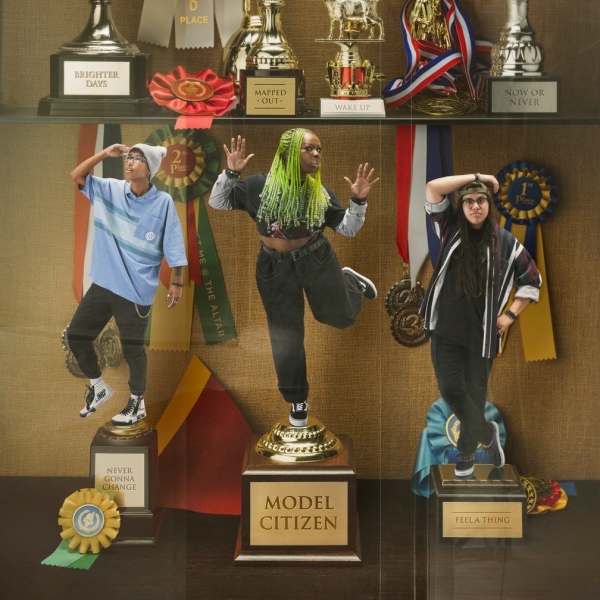 Pop punk’s resurgence is a trend that’s certainly gained traction this year. With chart-topping records from the likes of Olivia Rodrigo and Machine Gun Kelly spawning new interest in the genre, the bubbling underdog is now at the frothing forefront.

Surrounding the big names that have jumped on the sound, however, is a new rising DIY scene. Including bands like Pinkshift, Action/Adventure, and The Muslims, these bands are young, diverse, and recreating the glory days of mid-2000s pop punk, and possibly the most popular of these outfits is Meet Me @ The Altar.

As a result, Meet Me @ The Altar’s major-label debut EP, Model Citizen, arrives trailed by a lot of hype. Newly signed to legendary pop punk label Fueled By Ramen, the band have been sporting co-signs from massive names in both the punk and pop worlds. Fortunately, Model Citizen very much delivers on the band’s initial promise. Deploying chugging easycore breakdowns, guttural bass lines, and intricate powerhouse drumming all over, Meet Me @ The Altar are making their debut a singular adrenaline fuelled experience. Simply, they refuse to let up from the joyous chiptuned intro to “Feel A Thing” to the charming laugh from lead singer Edith Johnson that closes “Wake Up”.

Back in 2020, when the band started picking up steam with “Garden,” they told The Fader that "we wanted to write a super energetic song that was really positive, because a lot of pop punk isn’t positive. It’s about white dudes crying over their girlfriends.” Similarly, Meet Me @ The Altar aren’t crying on Model Citizen. Bright-eyed optimism and acrobatic rhythms animate the record’s highlights like “Brighter Days” and “Feel A Thing,” while the band’s dazzling energy and strength with a pop hook carry the EP as a whole. Even as the band explores topics such as the uncertainty of young adulthood on “Mapped Out” or the strained distant relationships of “Now or Never,” not a moment feels downcast.

Although the band are consistently upbeat, this does mean they’re largely operating repetitively throughout. Additionally, the band are pretty closely married to their 2000s easycore influences. But certainly, if you’re looking for your pop punk to be dour and angsty, you’re looking in the wrong place. Meet Me @ The Altar know what they are going for, and they do it well - showing off an undeniable songwriting talent in the process. If anything, there’s been a lacking sincerity and unabashed joy in the genre. For any kids out there feeling like they missed out on the glory days of Warped Tour or wishing to see more of themselves in the scene, Meet Me @ The Altar made Model Citizen just for you. Get ready to scream along.