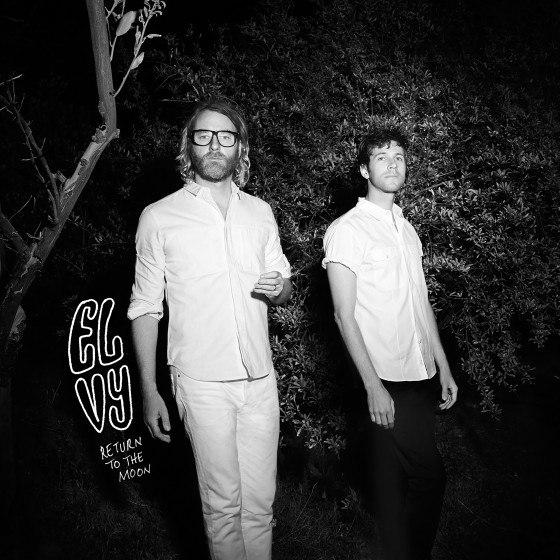 Matt Berninger probably had every right to put his feet up for a while as of last November, when The National (ostensibly) brought the curtain down on eighteen months of touring for Trouble Will Find Me - for this reviewer’s money, their best yet - at The O2 in London.

Instead, he’s been busier than ever; work on album number seven is apparently continuing apace, if a couple of new songs debuted over the course of a recent smattering of live shows are anything to go by, and he’s also found time to make good on a long-held desire to work with an old friend, Ramona Falls and past Menomena man Brent Knopf. If the cover of the resultant record is anything to go by, Berninger’s not even found the time for a haircut in a while.

Return to the Moon’s title track, first shared back in August, suggested that EL VY would present him with the opportunity to be a little more playful than The National’s standard predilection for maudlin drama usually affords. “I’m the Man to Be” seemed to confirm that; it swapped “Return to the Moon”’s chirpy melodies for sludgy grooves and an off-kilter vocal delivery, but retained the same lyrical silliness - the chorus provides the killer line in “I’m peaceful cos my dick’s in sunlight.” In execution, that prediction really only proves half-true; EL VY is certainly a very different beast to either Berninger or Knopf’s primary bands, but they both unmistakably leave their own stamps on the album, too.

For Berninger’s part, abstruse lyricism and a penchant for non-sequiturs is nothing new; his style has long been idiosyncratically unusual, with “All the Wine”, “Pink Rabbits” and “Vanderlyle Crybaby Geeks” all springing to mind on that front. He certainly hasn’t reined in that instinct now that he’s been paired with Knopf, but it’d be unfair to say that the words he’s written for Return to the Moon are throwaway, even if they often seem nonsensical on first listen. In many ways, you can draw parallels between some of these songs and his recent National output; like “Don’t Swallow the Cap” and “Pink Rabbits”, “Paul Is Alive” makes direct reference to his influences by tapping into childhood memories of his mother’s Beatles obsession, and “No Time to Crank the Sun” and “Need a Friend” both emanate the same melancholy that he’s made his calling card at his day job.

If the shifts in his lyrical approach are subtle, then, what EL VY does do is set Berninger’s vocals against a broader range of melodic and instrumental backdrops than Bryce and Aaron Dessner’s tightly-woven, intelligent exercises in guitar rock. Knopf is happy to pursue considerably more eclectic pastures on Return to the Moon; “I’m the Man to Be” is full-on funk weirdness, both the retro synths and the eerie backing vocals on “Silent Ivy Hotel” sound to have been plucked from a campy old horror movie (it works, by the way) and, late on, “Sad Case” and “Happiness, Missouri” soar, laying Berninger’s turns across the kind of rambunctious, aggressive guitar playing that the Dessners often break out on stage, but tend to leave off of their studio work.

The chances of either member of EL VY following James Mercer’s lead and dedicating more of the next few years to this band than to their original outfits are slim to none, but the term ‘side project’ often brings with it a flippancy that suggests that the work in question has perhaps been crafted with less thought or care than the artist’s primary venture. To suggest as such of Return to the Moon would be to do it an extreme disservice; it’s complex, witty, and - crucially - taps into a side of each man’s creativity in a manner hitherto unseen.