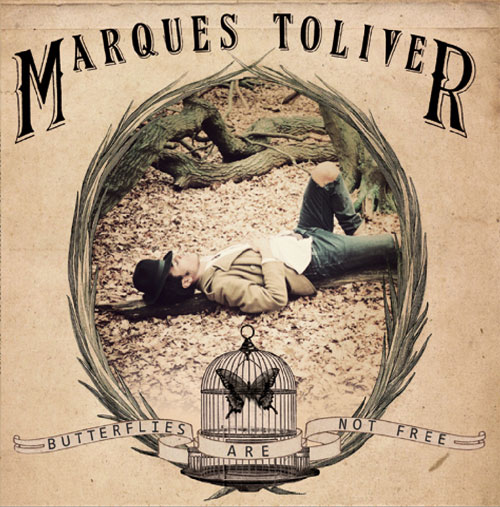 After making music via just about any employment he could get involved with – busking, collaborations, session work - American song-writer, singer and extraordinarily talented violinist, Marques Toliver has finally been given the chance to deliver his own EP, Butterflies Are Not Free, home to four of his enchanting compositions.

There’s no waiting around on this record, opening track ‘Charter Magic’ fires straight into the melody. Beautiful strings compliment Marques’s rich vocals which chant soul-lifting, playful thoughts such as “Catch me if you can/ I’m about to explode” and perfectly mirror the tone set by the light, spritely strings. There’s a certain sense of truth to these lyrics, as there’s an overwhelming sentiment that this boy is going to be a very important feature of music to come over the next few years. After the uplifting, enthralling introduction, the song steadies and slows to a more reflective, rather than euphoric tone with lyrics such as “I’m on a journey / to a place I’ve never known / to the land that has my soul” taking the reins. ‘Charter Magic’ is a textured, dynamically varied tune which, when nearing its end, turns into a beautiful string arrangement showcasing exactly what this fellow can do.

There’s a real sense of ‘coming of age’ to this album, with Marques sounding content and excited, as though his journey is finally delivering him to a place that he’s comfortable with. And what a journey it’s been. Whilst living in Brooklyn, he was ‘discovered’ by TV On The Radio’s Kyp Malone when busking, and went on to work with the band as well as with Bat For Lashes and Grizzly Bear. He moved over to London in 2009, and a performance on Later With Jools Holland at the end of 2010 as well as a number of very successful shows in the UK and the US alike really put his name on the radar.

‘Deep In My Heart’, recently released as a free download by Bella Union, continues the theme of battling to achieve what you’ve set out to, the imagery for the lyric “I won’t give up without a fight” being really nicely surrounded by plucked violin strings. Throughout, Toliver’s voice is sublime. From the moment that Butterflies… begins, right up until its closing point, his voice captivates and entrances, brimming with soul, overwhelming emotiveness and passion. There’s a John Legend-esque tone to his vocals, and the kind of dramatic imagery and narration in his lyrics that soul music is known for producing. He combines genres, textures and tones with such apparent ease that it takes a few spins of this EP to really allow his influences and intentions to come to light.

Having been following Marques Toliver’s progress for a while now, I was at first a bit disappointed that this EP had been polished and finished to the standard that it has, as a lot of the beauty of Marques Toliver’s work lies in the raw, uninhibited emotion which saturates his lyrics and undulates from his violin during his live shows. However, a few listens in and the style of the recording begins to make sense. It needs to sound this finished in order to pull the different styles and sounds into one cohesive record. His songs are still as achingly tender as they are live on stage, and the sentiment of every syllable still cuts like a knife. This EP is a real insight into the varied talents of Marques Toliver, for whom 2011 is sure to be a very exciting year.