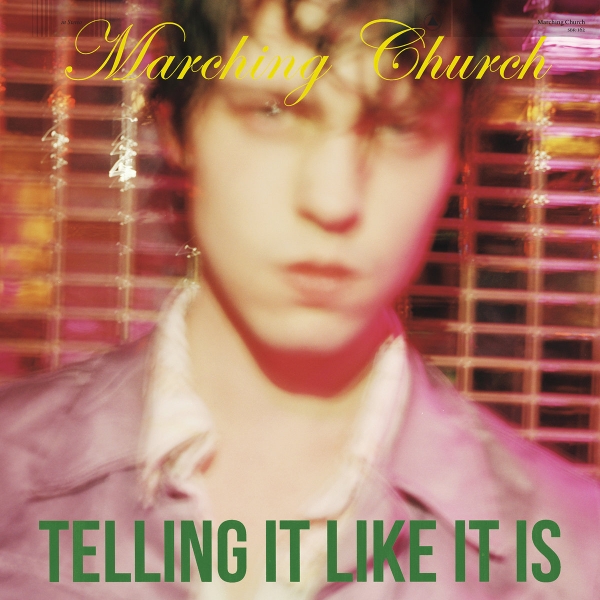 Marching Church – formerly a solo project of Iceage leader Elias Bender Rønnenfelt, but now a fully-fledged seven-piece – offers an outlet for Rønnenfelt to continue the musical search for self-discovery that initially started with Iceage’s third album, 2014’s Plowing into the Field of Love. Last year’s This World is Not Enough felt very much like a work in progress, but their new album, Telling It Like It Is, is a cocksure nine-track collection of focused and intelligent songwriting.

The most obvious change in the band’s sound has been the development of Rønnenfelt’s vocals – he’s become more open with his voice, letting his guard down and even embracing vulnerability with a fragile falsetto in “Lion’s Den”. The trademark lion’s roar that dominated the early Iceage records (the one that made Joe Strummer sound like Cliff Richard) has been replaced by a tender pseudo-soul croon, as if David Bowie were trying to perform Young Americans at a karaoke night after downing a bottle of expensive whiskey.

Despite being much more coherent than This World Is Not Enough, Telling It Like It Is never really reaches the heights of last year’s impeccable standout track “King of Song”. Lead single “Heart of Life” comes the closest, but still has ample competition - “2016” is an arena-sized anthem reimagined for toilet-sized venues and could quite easily allude to Iceage’s next move, whereas album closer “Calenture” sounds like Rønnenfelt playing a helpless heartthrob in a Richard Curtis film, desperately trying to make sense of things.

Telling It Like It Is does sound like a momentary escape from the real world, though (Rønnenfelt even goes as far as masquerading as a bird on “Inner City Pigeon”). It’s a disco ball in a downtrodden pub that occasionally shines a light on the ashtray angst of early Iceage, while remaining focused on the wider picture. It’s clear that Rønnenfelt has a lot of ideas and is still experimenting with the best ways of presenting them, so this album just feels like the self-proclaimed King of Song trying on one of his many crowns in a quest to see which one fits best.