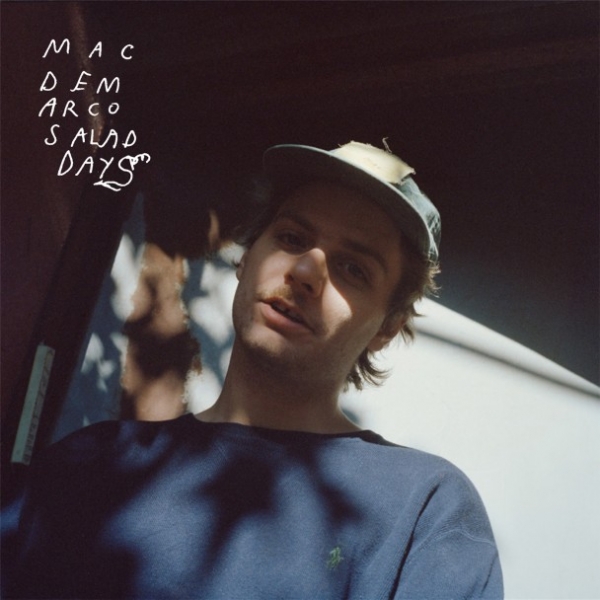 The arrival of spring carries with it the hope of better weather and the potential for spending time garden-side eating a nice bowl of crispy greens; a ritual indicative of the lighter fare and less-is-more mentality of the warmer half of the year. And what better way to celebrate the season than with a new release from Canada’s Mac DeMarco, aptly titled Salad Days.

As the title suggests, DeMarco’s third solo effort is much lighter on the palette than his previous releases, in terms of that endearing sleaziness evident in his live shows and ever present on his past records. There are even moments which almost sound tropical and fun. Fear not though, DeMarco still puts the cool back in the cigarette, happily manipulates his old beat up guitar through seemingly effortless valleys of picking and plucking, and grounds us all with his unpretentious prose.

“As I’m getting older/Chip up on my shoulder/Rolling through life/To roll over and die”. It’s definitely not the cheeriest of sentiments in the title track, but then again Mac DeMarco does not have the sunniest of dispositions – though you wouldn’t know it by listening to the relaxed, bright tones in Salad Days. This marks quite a shift for the former front man of Makeout Videotape whose sleazy, scrappy and warbled sounds bled their way into his first solo release Rock n’ Roll Night Club. Having signed with Captured Tracks for his second album – the also aptly titled 2 - DeMarco began the transitional journey of his second musical life partly fueled by his new, rather settled outlook but also inspired by different chip on his shoulder, age. With Salad Days, hints of the old seedy elements have been replaced by a crooner’s voice, clean yet contagious accompaniment, and lyrics about life lessons that are often hard to digest. “Tell her that you love her/If you really love her/But if your heart just ain’t sure/Let her go”.

What’s most notable about the change throughout DeMarco’s young career is that his music has a way of reaching out to his audience and inviting them along for the journey, be it immoral or reflective. Salad Days falls in the latter category and stands as a reminder that even a resident goofball can mature. The record also proves that maturity does not mean creative death – this is complete album and in many ways his best. DeMarco gives us a number of catchy tunes including “Let Her Go” or “Treat Her Better” that are worthy of that coveted single download option. There is even some nice vintage synth work on “Passing Out Pieces”, immediately vaulting his sound into the retro-pop sphere. While those individual songs are great, they generate the urge to listen to the whole record in its entirety which, in the end, may not be as healthy and carefree as the title and arrangements would have us believe.