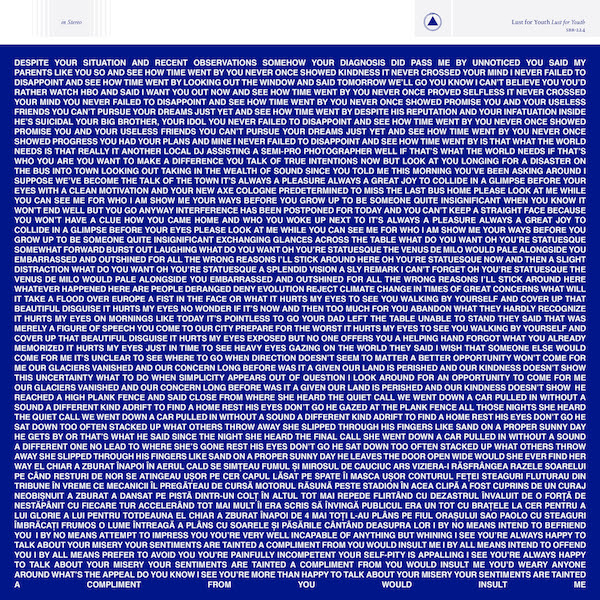 Hannes Norrvide’s lo-fi project has seen a lot of change since its inception in 2009.

Copenhagen’s Lust For Youth has expanded in members and, with it, so has their sound. As they drifted more towards new wave, things felt sharper and more in focus.

Combining dark, club-ready beats with post-rock explosions, all tied up with Norrvide’s detached delivery, Lust For Youth rode below the radar with fine collections of drolly mischievous pop. Their latest self-titled record feels like more of the same, though maybe now the power has somewhat diminished.

When those three sides of Lust For Youth come together in force, this record is a dizzying ride. “Insignificant” begins like the most crystalline of dancefloor anthems. Guitars chime, drum pads knock out a four-to-the-floor beat and synths glimmer until the pieces start to fall away, crumbling under the weight of Norrvide’s apprehensions. The beat remains but the guitars start to flood in, overwhelming the senses like a wave of terror. It almost feels like the light-up disco dancefloor slowly falling away between your feet as you plummet down, guided only by the flashing strobe lights.

Norrvide has a real way with words too. His wry wit can be razor sharp, as most cuttingly demonstrated in “By No Means”: “I see you’re always happy / to talk about your misery / your sentiments are tainted / a compliment from you would insult me”. But, even in its strongest moments, Lust For Youth often feels like playing a game of “spot the influences”. While it rarely ever feels derivative, but that doesn’t mean it’s original. There’s Ian Curtis, Mark E. Smith and Elias Rønnenfelt in Norrvide’s saturnine vocals. New Order, Depeche Mode and The Pet Shop Boys in the murky, sweaty, retro-futurist beats. Even a touch of Mogwai-esque post-rock mayhem rears its head.

Without putting any particularly original spin on anything, Lust For Youth often sounds dated. “Adrift” even slips into ‘90s Europop with its cloyingly cheesy, bouncy beats that drive the song along. And it’s here where the frustrations lie.

Compassion did occasionally feel like the product of a slot-filler at The Hacienda, doing its job pretty well though rarely making much of an impact beyond the moment, but still feeling modern. But by leaning into their maximalist tendencies on Lust For Youth, the introspection that really marked this project out is lost among a smorgasbord of other people’s sounds.