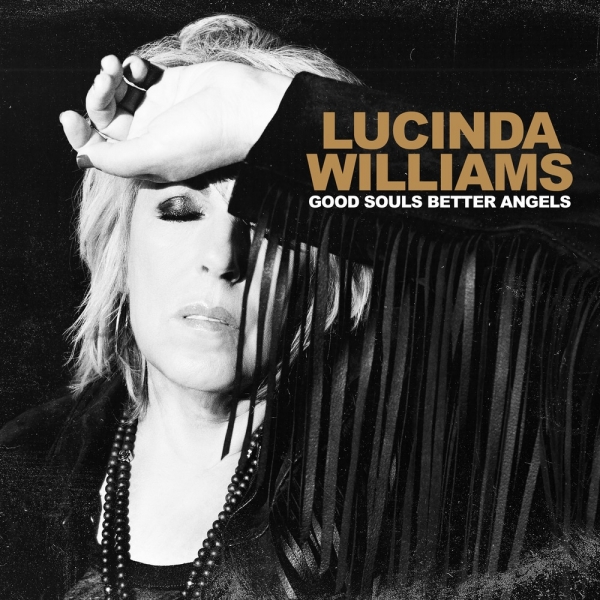 The old saying goes that yesterday’s papers are tomorrow’s fish and chip wrapping. But no one’s ever worked out how that applies to protest songs which, now more than ever, seem to lose their flavour before they’ve even left the packet.

That’s the quandary in which Good Souls, Better Angels, finds itself. Lucinda Williams’s thirteenth album was recorded in just fifteen days – a far cry from the three separate attempts it took to get her masterpiece Car Wheels On A Gravel Road on tape – finishing up last November. But the ensuing five months have seen the album emerging in an entirely transformed world from the one which birthed it.

Musically, Good Souls is a world away from the expansive The Ghosts Of Highway 20, a sprawling, murky, late-career peak which recalls Neil Young’s underrated and equally defeated Sleeps With Angels. Where the atmospheric Ghosts sounded like it had been plucked from the ether, Souls sounds dug up from the dirt – twelve shitkicking jams which veer from righteous to resigned.

Of course, the album’s primary target remains unchanged, in all senses – no mere musician could ever rile the Teflon president, let alone bring him down. But that’s an even taller order now that anyone’s invective, whether sung, shouted or tweeted, seems particularly inert in a world where taking it to the streets is now a literal public health violation.

Still, we’re a long way from the Christian right demanding that the Dixie Chicks shut up and sing, and if anyone’s voice can pull off this level of fire and fury, it’s the ragged, commanding drawl of Lucinda Williams. And boy, does she sound pissed.

Even at its least inspired, Williams never sounds less than engaged with what she’s singing about, exerting control over the songs at all times. On the grimy, honky tonk blues of “Bad News”, fingers are pointed at a predictable cavalcade of “Liars and lunatics / Clowns and hypocrites”, but her long-time live band keep it in the pocket, holding down a loping beat while Lucinda lets rip. The stately “Man Without A Soul” fares less well, taking aim at the White House with an optimistic refrain (“You hide behind your wall of lies / But it is coming down”) that feels particularly hopeless at this moment in time.

Good Souls never sounds less than compelling, but considering the album’s firebrand nature, it’s the more conciliatory that fares best. The stark, hymnal “Big Black Train” sounds like it was pulled straight from the Harry Smith anthology, and the closing title track offers a much-needed benediction – a gospel variation on the serenity prayer in waltz-time.

That’s not to say that the album is at its best when Lucinda plays it straight – most compelling of all is “Wakin’ Up”. While her band slides its way through a splintered, Gun Club-esque backdrop – all caves of ragged reverb and tense tom toms – that restrains itself from fully unleashing, while Williams snarls her way through a harrowing account of a relationship scarred by drugs and abuse. As a songwriter and a storyteller, she’s simply never recorded anything quite like it. After so long in the game, it’s miraculous to hear her take such a fresh approach to her sound.