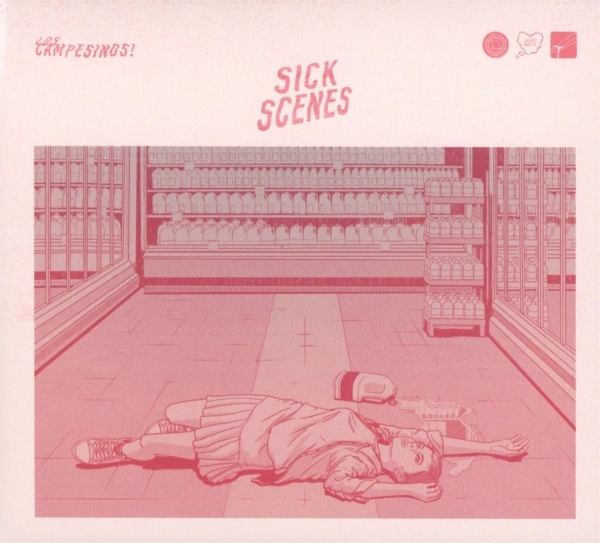 It’s been ten years since Los Campesinos! exploded on to the UK’s indie scene in a technicolour array of synths and suspicious looking stains they swore were cherryade. A hell of a lot has changed in that time, not least of all Los Campesinos! themselves, whose journey from indie-pop poster kids to genuinely skilled songsmiths is one of the most overlooked careers in contemporary indie.

Having built said career on quarter-life neuroses, heartbreak and a macabre preoccupation with death, it would be easy for the unfamiliar to dismiss Los Campesinos! as being melodramatic, depressing even. But while it’s clear they have no qualms flirting with, even relishing in the darker aspects of life, there’s always been humour behind the heartbreak, and an optimism behind their frothy, poppy hooks.

Sick Scenes is the band’s sixth album, and exudes the kind of effervescent energy not seen since their debut. From the opening “Renato Dall Ara (2008)”, there’s a sense of cathartic urgency, as if this was the band playing for the last time. And indeed, that came closer than fans might expect, with doubts surrounding both the band’s continuation, and the record’s release. “We wrote a large amount of those songs with no idea that they would be heard wider than the seven of us in the band.” says singer Gareth David in an interview for DIY. And while this draws another parallel with their debut.

It’s a worrying thought. Los Campesinos! have been an enduring, if somewhat underappreciated presence both in the UK and abroad for over a decade now. And Sick Scenes is arguably the band at their most realised, most confident, and even at times, their most downtrodden.

Taking a typically LC! approach, images of ageing, mental breakdowns and family funerals are delivered with both tact and a wry smile; astute character observations penned with their trademark British humour. Even the record’s darker moments, “A Slow, Slow Death” for instance, or “Got Stendahl’s” harbour a genuine optimism that stems only from the band’s ability to accept the inevitable.

Though lesser bands will regularly stagnate before finding themselves six albums in to their career, Los Campesinos! have managed to carve out a niche of their own creation and as such have remained relatively untouched by the often-fleeting nature of contemporary indie. And though Sick Scenes is unlikely to win the band legions of new fans, it’s a record that sits comfortably alongside the rest of their canon while acting as an affirmation as to why, in 2017, a decade after their debut, Los Campesinos! are just as important now as they were ten years ago.