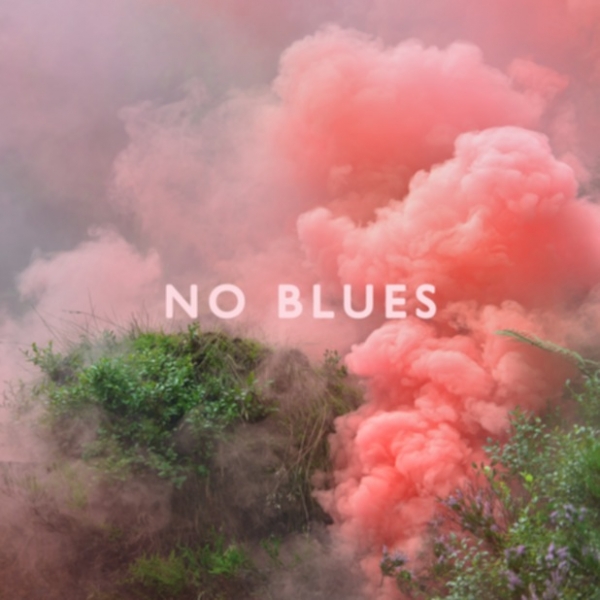 NO BLUES. It’s a bit of a wry in-joke for fans of Los Campesinos. Normally they specialise in a lot of blues – it’s just part of their makeup. Most of their songs are drowned in an absolute fuck-load of blues. It’s also an especially glib contrast to their last record, Hello Sadness… what’s in a title though?

The main themes are still death, decay and football but the sound palette is definitely brighter here, and on first listen it even sounds like it could almost be happy. It says a lot that new single “Avocado, Baby” features a rousing chorus accompaniment by a group of Welsh cheerleaders – it’s bold and brash and, whisper it, kind of cheery. Not since “You! Me! Dancing!” has there been such reckless glee in the LC! camp. Fear not though, most of that is just surface.

The organic electronic pulse which threads these songs together radiates a certain brightness, but there is still a dark heart beating underneath and a closer listen to the lyrics reveals that eternal bleeding – “Two words upon my headstone please, don’t need date or name, just ‘Sad Story’” laments poor old Gareth on “Cemetery Gaits”. However for a change there is often a more cautiously optimistic flip side to be found close by like “Oh it won’t get better, that doesn’t mean it’s gonna get any worse.” (“Avocado, Baby”).

For the most part the lyrics here abandon the petulant scorn of past and pre-occupy themselves with much more ornate imagery in fitting with the less noisy songs. It’s not all po-faced verse though, football fans will no doubt enjoy Gareth casting himself as a Trequartista, rhymes with Tony Yeboah’s signature moves and a subtle biblical reference to Joseph-Désiré Job. There is still plenty of note going on lyrically but, in a wise continuation from the previous album, they no longer assert themselves as the most important aspect of the tracks instead bleeding into the songs, as a part of the whole. This is never more apparent than in the the clouded cooing of “Selling Rope” – a track which could be their best closer yet (and they do closing tracks very well), as it gradually builds a towering swirl of restrained noise, which is all the more effective for the lack of volume which preceded it.

Therein lies the real difference – No Blues is missing is the little flashes of clarity which used to be peppered throughout, normally the little climaxes which most of their songs hurtled towards, like the brass bursts of “In Media Res” or the sound wash of “To Tundra”. The peaks and troughs are much less pronounced here, because nothing is quite as straightforward as it used to be – the surface is more composed but beneath the songs are coloured with the complexity of age, as everything melts into everything else.

The frayed electronics and delicate vocal harmonies of “The Time Before The Last Time” sound arrestingly lush but it’s only after multiple listens that the subtle intersecting layers properly reveal themselves and showcase it’s subtle construction, a reveal similarly true of the acoustic noise arch of “A Portrait…”. No longer a band rough and ready jumping breathlessly between ideas, they are burying their chaos under smooth edges and verdant melodies and it sounds better than ever. These more polished but less straight-forward songs makes for their least instantly gratifying collection, but leaves a strong feeling that in the long-term it might become the most rewarding yet.