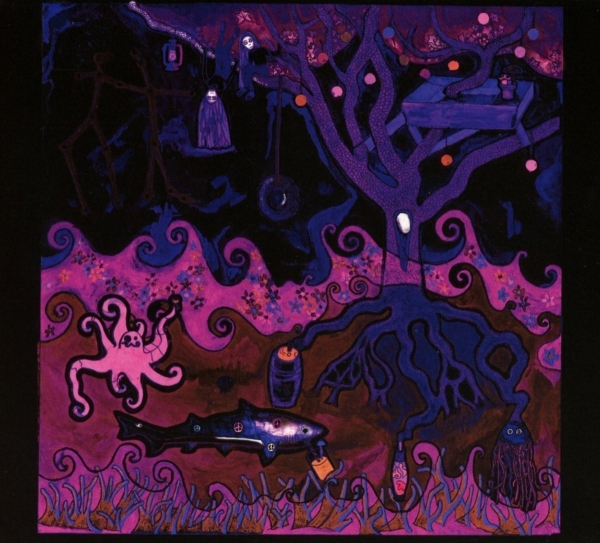 There’s a school of thought that it’s no longer possible to create anything original with pop music. With their debut I, Gemini, Let’s Eat Grandma make nonsense of such an idea.

Over its ten songs teenagers Jenny Hollingworth and Rosa Walton create a world entirely of their own making. What’s also remarkable is that whilst the music is constantly expansive - they sound like they’re backed by an orchestra at times - the pair played all of the instruments, including brass, woodwind, keys, drums and guitars, themselves.

Much has been made of their musical telepathy, and the album’s title is surely a reference to it (Gemini was the name given to the twins Castor and Pollux from Greek Mythology). Having been life-long friends, musically Let’s Eat Grandma finish each other’s sentences in song the same way close mates do in conversation.

“Deep Six Textbook” eases into the hallucinatory world of the records’ artwork, starting with slow, brooding drums and organ, before their signature intertwined vocals appear, enhanced with constantly inventive light touches – saxophone, xylophone and the sound of the sea.

Such intricacies set up I, Gemini’s musical freedom, with songs frequently beginning in one style before moving to somewhere completely unexpected. “Sax in the City” starts as a sea-shanty before it stops on the line “Tell me something interesting” when a brilliantly woozy saxophone mutates it into a pop song of raw power.

Despite their agnostic approach to genre, the songs knit together seamlessly. As a result “Eat Shiitake Mushrooms” with its euphoric house-music beat doesn’t feel out of place with the more baroque songs. It features a fantastic piece of rapping from Walton, which is so quick it’s difficult to keep up with the words, “The water’s contaminated with a peculiar illusion, intoxicated with an electric infusion.”

There’s also a sense of menace and danger at play. “Rapunzel” revolves around a classical piano motif which sounds like it was recorded in a huge ballroom. It lulls one into thinking it’s their most straightforward song, until the lyric arrives, “My cat is dead, my father hit me, I ran away, I’m really hungry”.

Such darkness can also be found on “Sleep Song”, a story of somnambulism, (“I wonder where I’m wondering, standing on the landing.”) The slow and restless verses are bookended with fast, chattering voices in the background, recreating that sense of being between sleep and consciousness. They literally start screaming before the song comes to a restful close.

Their ability to move across moods is emphasised with “Welcome to the Treehouse”, which is split over two songs, the sparser, meditative Part I and the textured, intense Part II, both linked with the words “I keep thinking about it.” They’re so well executed that rather than focussing on a sense of precocity, what’s far more interesting is that Let’s Eat Grandma are writing such unusual and original music.

After such a heady trip, the closing “Uke 6 Textbook” is the most playful moment here. A faster, stripped down version of “Deep Six Textbook”, with just their voices, glockenspiel and ukulele, it adds another string to their impressive musical bow.

The songs frequently clock in at over six minutes and whilst Let’s Eat Grandma write in the language of pop, they rarely adhere to the formula that dictates that the perfect pop song should last for three minutes - often the intros alone take that long. That’s not to say that they’re self-indulgent however, there’s so much going on with the music the ideas need room to unravel.

They’ve described their music as ‘experimental sludge pop’ but I, Gemini is rather more than that. It’s an album that’s in love with music and whether they’re creating space-rock symphonies or sea shanties, rapping or unleashing a huge pop chorus, the end result is consistently wonderful. Let’s Eat Grandma have made one of the most intoxicating, inventive and original records of the year.