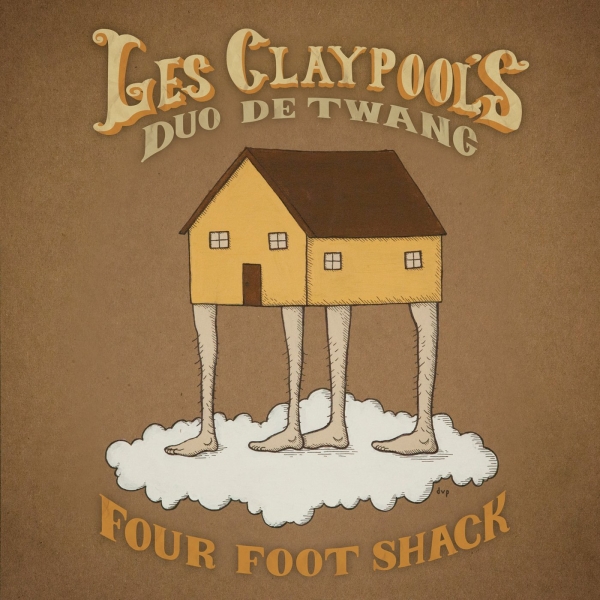 Here’s the thing: you know if you’re gonna like this or not before you even hear it. Les Claypool’s work has been many things over the years, but almost all of it channels a weirdness unique to him. Whether it’s Primus or any of the dozen side projects he’s started, the common theme is Claypool’s inherent personality. So, depending on whom you ask, it’s either his greatest asset or greatest hindrance as a songwriter and performer.

Take his newest project, Les Claypool’s Duo De Twang, for example. The aptly named twosome features Claypool’s signature bass playing and guitarist Bryan Kehoe’s guitar work coloring in and out of the lines of some good ol’ chicken-fried, well, twang paired with sparse percussion. Further still, their debut album, Four Foot Shack, is a series of covers (which the exception of the 42-second title track), ranging from Claypool’s own catalogue to interpretations of traditional songs, Jerry Reed, Alice in Chains and The Chantays. This may be the silliest release in Claypool’s career, and that’s saying something.

Which is to say, Shack might be the most entertaining record the virtuoso bassists has ever released. A bluegrass version of the Bee Gee’s “Stayin’ Alive” is one thing. It’s entirely another to hear the era-defining classic with belching slap bass and Claypool affecting a swamp-drenched vocal style. The “ah-ah-ah-ah”’s from the original become “howh-howh-howh-howh” in Claypool’s hands while Kehoe unleashes a funky guitar solo in place of the original’s bridge. Then there’s DDT’s take on “Man in the Box.” Here, the grunge anthem is turned into a chugging, Tennessee Three-sounding jamboree, over which Claypool – with his tongue embedded into his cheek at this point – takes Layne Staley’s vocal melody into cartoonishly operatic territory. Elsewhere, DDT attempt a fairly accurate (relatively speaking, of course) recreation of “Battle of New Orleans,” turn Primus’s “Jerry Was a Race Car Driver” into a surprisingly serpentine sprint, and somehow manage to translate the definitive surf-rock track “Pipeline” into a coherent, Western—style soundtrack. You can practically see the tumbleweeds drift by as Claypool sings the song’s melody with as much satirical gusto as anything he’s recorded.

Naturally, we’ve come to expect this from Les, a man who takes “not to be taken seriously” more seriously than anyone else in music. In other words, he clearly has a blast doing this, and it shows through in a release like Four Foot Shack. The album isn’t any kind of milestone or career-defining collection; then again, it isn’t supposed to be, either. It’s simply Les Claypool dicking around with other people’s songs. And, you know what? It’s still more fun than most of the Top 40.