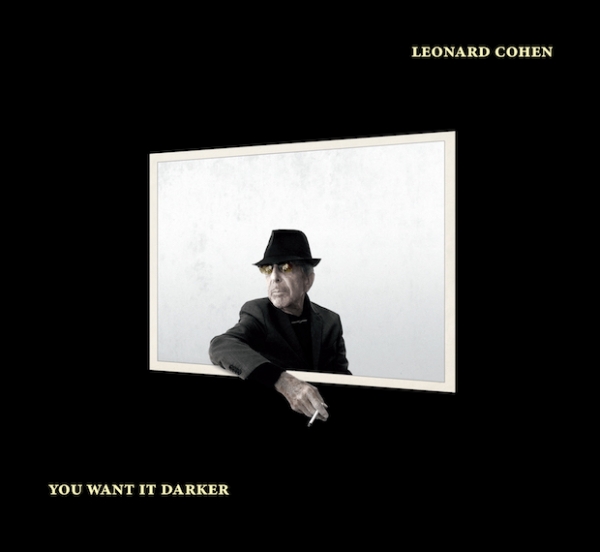 No matter how dire the headlines have gotten as of late, Leonard Cohen is here to remind us that things can all get worse. We could be living in a world without Leonard Cohen.

On his 14th studio album, You Want It Darker, the 82-year-old Cohen frequently conjures haunting scenes where his singular presence is fading and his creative light is starting to dim. Melancholy lyrical ruminations on fatality are nothing new for Cohen, but on these nine new songs he seems resigned – even comforted – that the end is getting near.

“I’m ready, my Lord,” Cohen knowingly sighs on the lead-off title track. “If you are the dealer, let me out of the game / If you are the healer, I’m broken and lame /  You want it darker - we kill the flame.” Cohen and his soulful background singers evoke Abraham’s desperate proclamation to God (from Genesis 22:1) in the swelling gospel-like chorus, “Hineni, hineni,” which translates from the Hebrew to “Here I am.” Cohen is not hiding in the shadows looking to coax a few more stolen days from his maker; he’s illuminating precisely where he’s making his grand final stand, ready for the cryptic uncertainty of whatever mystery comes next.

These songs have the funereal grace of David Bowie’s elegant final goodbyes (The Next Day and Blackstar), as well as Bob Dylan’s trio of reflective, mournful albums that helped usher in – and bring some clarity to – the fractious start of the 21st Century (Time Out of Mind, Love and Theft, and Modern Times). But each of these paragons of modern pop have their own distinctive way of expressing how their respective journeys draw nearer to the end, as well as their own poetic manner of embracing, or brazenly refuting, the darkness that awaits us all.

After Cohen startled his fans by admitting in a recent profile in The New Yorker that he was “ready to die,” he eventually backtracked a bit by claiming, “I’ve always been into self-dramatization. I intend to live forever.” And while Cohen’s works have an eternal quality to them, the man himself won’t always be around to make sense of the world’s futility for us, and we should listen closely to him while we still can.

“Treaty” is a wistful elegy to a lost love that can also double as a plaintive contemplation on the complicated relationship that Cohen’s fans have with the idealized version of the artist that doesn't truly exist: “I’m angry and I’m tired all the time / I wish there was a treaty between your love and mine / I’m so sorry for that ghost I made you be / Only one of us was real, and that was me.” The apology is poignant, but unnecessary, because in order to continuously share these vulnerable parts of himself with those who love him, spirits of some sort have to be summoned – and these imaginative, artistic specters will take his place when he ultimately leaves us all behind.

Throughout You Want It Darker, Cohen routinely dismisses the constructs of both salvation or forgiveness, and he seems personally disinterested in achieving either glory – for neither one can save him now. “I better hold my tongue / I better take my place / Lift this glass of blood / Try to say the grace / Sounded like the truth / But it’s not the truth today,” he intones on the elegiac hymn “It Seemed the Better Way.” Cohen is constructing his own religion here over nine songs in a scant 36 minutes. Indeed, he’s been doing that throughout his entire exalted career, converting devout believers with each new mythical fable he puts to song.

And that unwavering connection between Cohen and his dedicated fans and family (son Adam Cohen was at his side handling the album’s spare, refined production) is ultimately the solitary thing that can drive away the darkness and keep the creativity flickering within his venerable heart. “If the sea were sand alone / And the flowers made of stone / And no one that you hurt could ever heal / Well, that’s how broken I would be / What my life would seem to me / If I didn’t have your love to make it real.”

Leonard Cohen has spent his entire career illustrating both the fiery and fatal sides of love through his words and his music, and anyone who has listened to his songs has learned something true about themselves in the process. Cohen has remained a beacon of inspirational light in a world gradually consumed by vile intolerance and abhorrent characters, but through his music we can all join him in keeping the darkness at bay for as long as we possibly can.