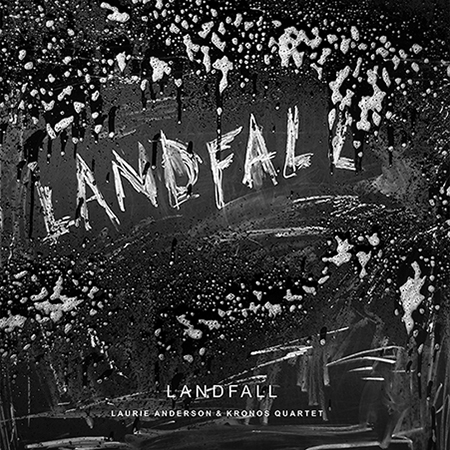 The most destructive Atlantic hurricane, responsible for over two hundred deaths and damage estimated at 75 billion dollars in October 2012, inspires this beautifully-measured collaboration between two venerable avant garde artists.

There is a profound sense of loss, not only physical, and awe turning to desperation as the energy develops and the quiet gives way to agitated rhythms from the quartet as the recognition of the wreckage takes hold. Anderson ensures that the daily ordinariness of everyday life and conversation is never fully recessed, as her narration swings between descriptions that are real, then surreal and then overwhelming. Hers is an impressive range of vocal tone and rhythm, interspersed between features of the quartet’s own representation of responses to (rather than just depictions of) the devastation caused. The quartet’s sound is periodically accompanied by slightly sinister, but never over-emphatic, electronic pulsings as the predominant emphasis remains on a settled, almost Edenic world almost, yet not quite, swept away.

Though one is always aware of the physical disaster, and the characteristic mood is necessarily sombre, what impresses is the variety of rhythmic figures throughout the album, with some exquisitely subtle modulations. Anderson grounds the piece in the world of human emotional experience rather than material loss. We do not lose sight of the personal, the individual, in the midst of the expanse of the physical destruction. One is reminded of Gillian Anderson’s very different but equally effective reading of Virginia Woolf’s final letter in Max Richter’s Woolf Works. There is a “terrible beauty” in “Everything is Floating”, characteristic of an album that juxtaposes a range of carefully considered effects that repay close attention to the recording’s many nuances.