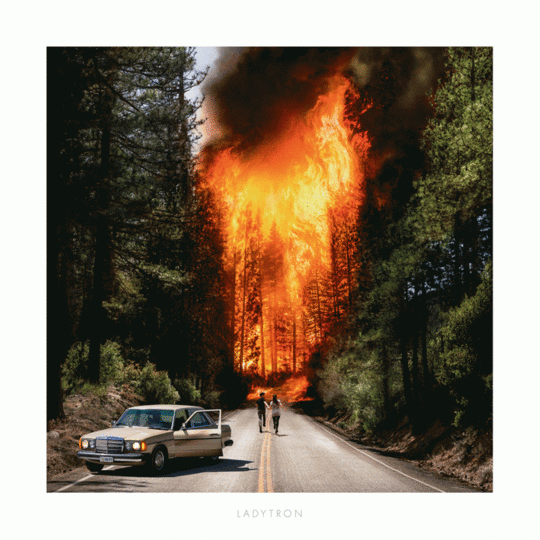 ​In the twenty years since their formation, Liverpool-based band Ladytron have thrown many curveballs at their followers.

Early singles such as "He Took Her To a Movie" tapped into the electroclash sound popular at the start of the millennium, but they quickly moved onto melancholic pop with the likes of "Playgirl", while "Blue Jeans" and "Seventeen" were their first tentative steps into adding a grittier element to a sound which up until then was essentially synth-pop.

As the band became exposed to a wider audience through support slots with the likes of Depeche Mode and Nine Inch Nails, founding member Daniel Hunt’s production work for Christina Aguilera, and remixes for Blondie and Paul Weller, their sound became harder, and their pop nous became more prevelan. This resulted in three three brilliant albums in a row: Witching Hour, Velocifero, and Gravity The Seducer.

Eight years since the release of Gravity..., this self-titled album should be a celebratory leap. However, it’s a somewhat restrained return; rather than the nuanced dream pop of Gravity..., which suited them so well, we’re firmly in Velocifero territory here. Tracks such as "Tower of Glass" and "The Island" fizz away pleasantly enough, but when you consider their prowess within this sound in the past, these tracks, albeit good, don’t hold the dramatic power a track such as "Runaway" does.

After a tentative opening selection of tracks, the touch paper is lit on the first of two tracks led by Mira Aroyo. Dedicated fans will be aware of her knack for an album showstopper ("Deep Blue", "Moon Palace"),and she casually provides an LP highlight here, her chilly delivery shining on "Paper Highways".The oppressive darkness of the song's verses, all metallic guitars and harsh atmospherics, is blown away by an electrifying, uplifting earworm of a chorus. It’s one of their finest tracks to date, and from hereon in the album really picks up the quality.

They revisit well-charted territory: the uneasy yet anthemic ("Run"), eighties synthpop (the brilliant "Deadzone"), fuck-you pop bangers ("You’ve Changed"), and does-this-work techno ("Horrorscope"), all executed with the quiet confidence of a band sticking firmly to their formula, knowing that they do this kind of thing better than most.

Aggressive sound-shifting such as those on their previous three albums is obviously something which can’t be sustained. Long term fans won’t learn anything new here, but a good Ladytron album is better than no Ladytron album, and seeing how they didn't even seem to exist a few years ago, this is something to be thankful for.