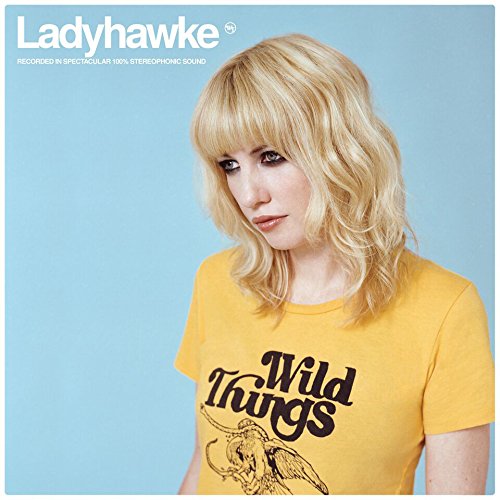 New Zealand native Pip Brown has mirrored her surroundings and given us a glimpse into her life with each release so far. The wide eyed optimism mixed with Stevie Nicks whimsy and classic 80’s pop made her excellent 2008 debut almost greatest hits-like, an album where every track is as strong as the one that preceded it.

Her second album Anxiety came four years later. A move to London resulted in Brown over drinking and partying which heightened her documented mental health issues (a clue is in the title), the musical mixture of early 90’s Britpop and New Wave was an exciting proposition on paper and had moments of note, but on the whole wasn’t executed well enough to prove a worthy follow up to such a strong debut.

Now another four years later we have Wild Things. Demons beat, married and now living in LA, Brown’s new environment is reflected on this release, and it’s….ok.

Ladyhawe’s kind of pop has always had that little lean to the left of centre, be it avant garde noise rock collaborations with Nick Littlemore (Empire Of The Sun) as one half of Teenager, or dismissing the expected route for her second LP to make a rock record. What you have this time is shiny pop crammed with hooks, the widescreen aspiration to reach the scale of a Sia, a Jepson, or a Swift, but at the fraction of the cost.

Wild Things' problem is that it suffers from such heavy handed radio friendly production that it strangles the songs. The opener “Love Song”, a cute ode to married life is indicative of this, a fizzing pop song with massive chorus, but the overbearing production and overly compressed sound means that the song itself is fighting a losing battle. The same mistake is repeated on the spiky “Dangerous”, you can almost hear the music being batted into its place, this production is apparent throughout, maybe designed to sound great on the radio, or a pair of Beats headphones, but not much else.

There are some serious missteps here also; the faux reggae beats of “Hillside Avenue” is electropop-dancehall, which should never be a thing - even Robyn, an artist incapable of doing anything wrong came unstuck when she did the same thing on "Dancehall Queen" track (it always ends up sounding like Ace of Base, as it does here), while “Golden Girl”, with its twee acoustic coda and “oooh ooooh” hook could either be described as joyously euphoric, or the kind of clichéd cheese-pop that make Clean Bandit so unappealing (it’s the latter).

Wild Things does get it right in parts, especially when the approach is that of slightly anxious pop. “Let It Roll” is jagged and nervy, the love-filled abandon of “Chills” is sweet and inviting, “Money To Burn” is jittery and drenched with inviting synth work, while “Sweet Fascination” is low paced and seductive. The radio friendly sheen is not evident here; it's grittier, and allows Brown’s undeniable talent to shine.

The third Ladyhawke album follows the same path both Empress Of and Grimes travelled with their latest releases, where the rough edges that made them interesting in the first place have been replaced with a synthetic sound better suited to RnB. Brown has stated that she scrapped a finished album of material due to its dark nature, yet her debut worked so well because among the glorious pop of tracks such as “Dusk Til Dawn” or “Paris Is Burning”, there was a dark intrigue that made her so much more interesting than the slightly one-dimensional artist we have on show here.