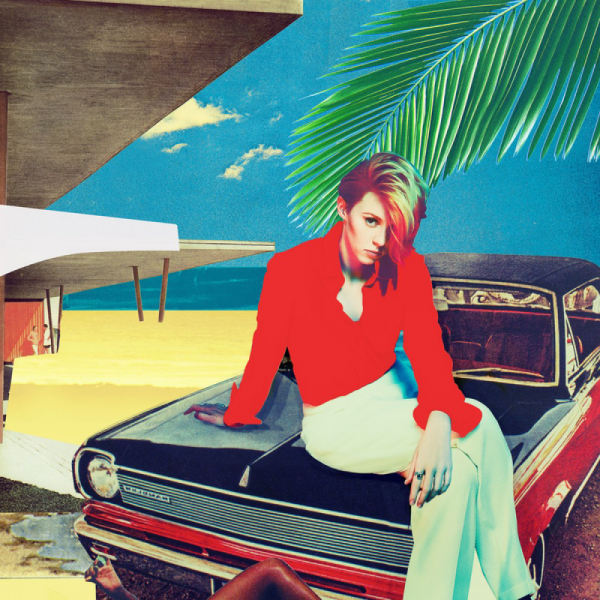 Half a decade back yonder saw Brixton twosome Elly Jackson and Ben Langmaid unleash a cavalcade of blockbuster electro onto the charts, both this side of the Atlantic and o’er the pond. “In For The Kill” drew attention from Kanye and Skream, whose dubstep remix helped spill the genre into the mainstream; “Quicksand”, “Bulletproof” and “I’m Not Your Toy” remain cemented in DJ sets nationwide as genuine synthpop classics.

Though the professional relationship between Jackson and Langmaid has ceased – mired in mystique, still – Jackson has soldiered on, alone, for album numero dos. Langmaid’s still got a few writing credits though, so his presence isn’t completely gone; there are remnants of the team that crafted La Roux, even if they are scarce. The follow-up to 2009’s self-titled debut has been one of the most eagerly anticipated pop LPs post-millennium; there had been those that didn’t even believe it would come to fruition, but here we have it, La Roux’s second album: Trouble In Paradise.

“Let Me Down Gently” harbinged the now-solo La Roux’s upcoming full-length. A taut synthpop cut, reminiscent of prior material, it was easy to fall in love all over again; add a gorgeous Gerry Rafferty-style sax line and an aura of despair, and you’ve got a ripe winner. It mixed, superbly, the old with the new – crisp hooks and ‘80s synths with a deeper emotional edge and penchant for the unexpected.

Faintly Latin axes shimmy on opener “Uptight Downtown”, and Jackson’s vocals take the reigns with a firm caress. There’s funk slithers and red-lit hedonism – it’s not exactly a subtle title, is it? – as she yearns for the par-tay. “Sexotheque” (isn’t that just a brothel?) veers to Brazil for exotic twangs and tropical sass – there’s considerably more natural elements than the electronic-based debut. “Cruel Sexuality” relies on organic basslines and big, chunky grooves too. Again, there’s a confidence in her voice and lyrics that implies a newfound strength: where La Roux wielded shiny tracks with wounded themes, Trouble In Paradise often does the exact opposite, using subtler, less bombastic tunes with strut-inducing words.

Probably the best sliver of the record is “Tropical Chancer”, a Chic-flavoured goth-funk ballad with marimbas and Duran Duran synth parps; it shouldn’t work in the slightest, but it does, so well. Jackson’s bravura peaks here, delivering the vox with attitude and tenacity. If the rumours of her suffering from stage anxiety were ever true, they’ve definitely faded.

Trouble In Paradise lacks the oomph and in-your-face melodic bravado that La Roux burst into our lives with. There’s no “Bulletproof”-esque fusillade, nor a tempestuous bloodlust á la “In For The Kill”. What we do is a lot more emotionally mature. It doesn’t rely on extravagant motifs or flamboyant anthems. There’s a notable evolution here, and we see the lone Jackson strive for something you can sink your teeth into over the course of a few days, weeks, month, rather than something you can insufflate at a club in the space of a few minutes. “Let Me Down Gently” should’ve suitably whetted your appetite; grab your knife and fork, lick your chops, and tuck in.