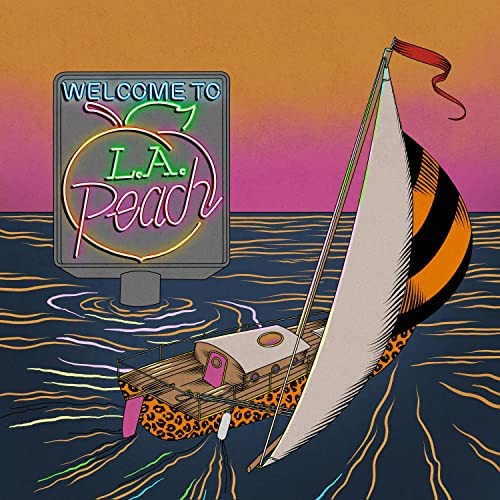 L.A. Peach’s previous guise was the solo moniker of leader John James Davies. With the project’s debut EP however, comes the first collective outing from the newly minted London-based four-piece.

With two singles preceding the EP’s release; the first, “Amateur”, a drum-heavy track verging on the anthemic, barrels in introducing both Davies’ rich lead vocals and Olivia Wood’s elegant support. That upbeat, floating sound carries through into their second offering, mitigating a more sinister lyric. “Power Trip” is from the perspective of “creepy, power-hungry men,” as Davies has explained. “You know the type I mean; the ones that need to become extinct. The ones that don’t allow for safe spaces to be created. The ones that make you ill at ease in all situations. I did my best to create a character that you hate! And I hope you all hate him as much as we do!”

Reversing roles for “Bottomless Brunch”, Davies then pines after a seemingly unrequited love interest: “Wouldn’t you agree / we’re better together?” he pleads, over more of the same lilting drums. The EP’s finale, “Forever Don’t Sound Long”, shifts slightly to take on an almost big band sound, and sees Davies’ vocals complimented by an effortless saxophone solo from Wood. “Only God can judge me right now”, Davies insists, as the permanence of tattoos is used as an extended metaphor.

Across the punchy four tracks of Welcome To L.A. Peach, the band succinctly introduce their indie-pop sound - one that’s curated from a range of their individual influences. The result is a confidently understated, ‘80s-inspired take on the personal as well as the political, with an ambience that doesn’t require too much of their listener.