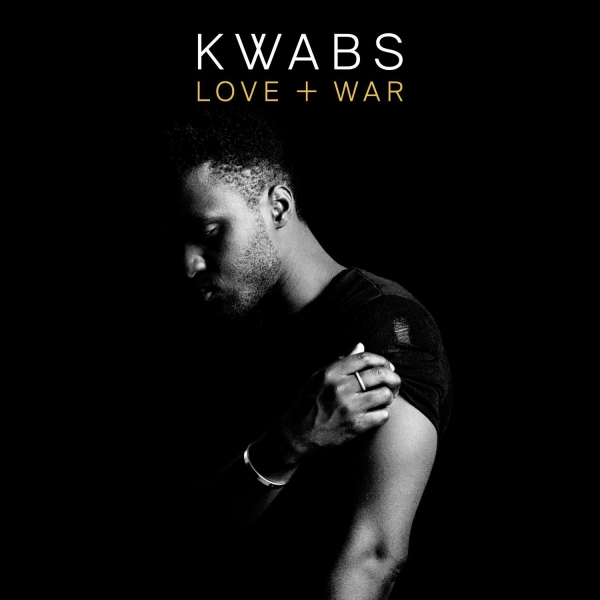 Bermondsey-born chanteur Kwabs has been on the cusp of greatness for well over a year. Everything’s in place - all that’s needed is this push onto to the main stage.

Kwabs has all the building blocks for success — a stint as the leading vocalist in the National Youth Jazz Orchestra, education at the Royal Academy Of Music, a viral vid under his belt — so it’s no wonder at all that his debut LP Love + War is a rollicking one.

Teased to no end over the course of this year, the record has been a long time in the making. We’ve been waiting on tenterhooks for yonks to see the finished product, after early live sessions and random tracks sent ripples of ears pricking up across the globe. His collabs with SOHN and Dave Okumu in particular piqued interests.

He’s not gone down the big pop route on Love + War and yanked in a bunch of high-profile super producers to bulk up, instead relying on his own talents and, where needed, collaborators which he has a great creative partnership with — and the results speak for themselves. The rejigged “Layback” with Okumu is a slick, West Coast hip-hop inspired charmer with chopped-up vox and cascading beats; “Look Over Your Shoulder” thumps with vigour, fusing gothic synthwork and pitched percussion with Kwabs strained tones.

Even tracks we’ve heard before and got to grips with over a long time, like “Fight For Your Love” or “Walk”, still pack a wallop. The former’s been blueprinted for dancefloors with rousing drops and a monumental chorus. The latter, arguably Kwabs’ calling-card cut, is a sizzling soul-pop anthem, with bravado and swagger — those qualities aren’t something Kwabs channels all too often, but when he does, he excels. There’s a sense that perhaps he’s held back on some cuts, but that might work as advantage, creating an even larger contrast with a bigger impact.

Although not all out-and-out explosions like “Walk”, though “My Own” comes close, each of the tracks on Love + War is a magical listen, skittering through Kwabs’ silky take on various genres (soul, pop, electronica, R&B, hip-hop etc.), but never being pastiches or gimmicky lurches into jarring styles.

Kwabs’ voice is built for ballads - it’s robust, evocative, malleable - and this has a twofold effect on the album. Like Adele, Sam Smith, and many other popsmiths that’ve built careers of tearing the hearts of the populace asunder, Kwabs’ quivering tones are sodden in feelings that could make mortals well up with rising floodwaters of tears. He’s got a great set of pipes, no bones about it.

As well as this striking tenderness, Kwabs’ earthy tones and bassy boom are deftly applied to pristine pop odes. Sam Smith’s “Money On My Mind” is arguably his finest effort to date, and Kwabs’ sounds have a similar fate — when he’s crooning swoon-heavy gut-punches, he’s unstoppable. When he guns for swaggering electro-pop or soul-infused dance bangers, there’s almost nothing than can get in the way — this is the best pop music in the U.K. right now.