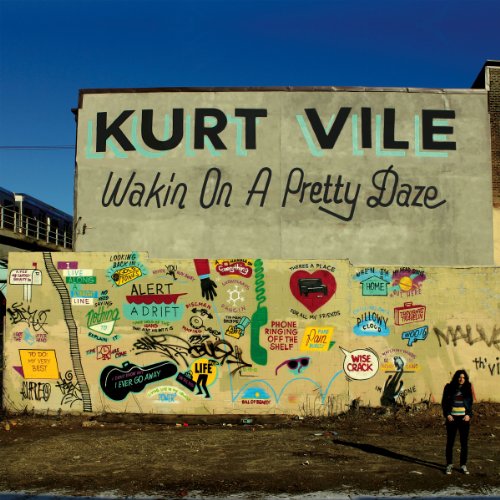 In an interview with AV Club around the release of Childish Prodigy, Kurt Vile explained his work ethic: “It’s like climbing a ladder. I like to climb it really slowly. I could probably get really professional right away, but I like to take baby steps and find my own way”. In this respect, nothing much has changed – Kurt Vile certainly never comes across as a man in a rush. But in taking his time, he has made a lot of alterations to his sound. Yet the result of his slow, methodical approach to record making contains not one whiff of being overcooked; the spacious, ambitious Wakin’ On A Pretty Daze sounds wonderfully lived-in, wholly formed, and very well suited to the fella.

His fifth album is less instantly rewarding than its predecessor, 2011’s fantastic Smoke Ring For My Halo, but I’d wager it’s capable of gifting the listener equal if not greater glee providing they allow it the requisite time to settle. It’s a much more colourful, warmer, more optimistic album, both increasingly focused in its aesthetic and more sprawling in its approach, prone to revealing its subtleties over time rather than bombarding you with obvious charms. Near title-track ‘Wakin’ On A Pretty Day’ almost encapsulates the record’s whole approach; a nine minute epic that opens the LP in a manner akin pulling back one’s curtains to discover it’s unexpectedly gorgeous outside, very little actually seems to happen in it, but what does go on could only be more endearing if you found out it volunteered for charity and wanted to cook you breakfast.

The word “slacker” gets attached to Vile often, but he’s clearly a man who puts in a lot of work. You don’t get the impression that any of the lengthy songs here (and there are many) stretch to – and on one occasion (the closing gloriousness of ‘Goldtone’) break – the ten minute mark because Vile couldn’t think of a way to end them earlier. Everything sounds very delicately played and placed. Even his laid back vocals, which one could mistake for disinterested, reveal themselves to be remarkably expressive. Every syllable is very deliberately sung in the precise manner he sings it in, which gives a playful character to songs like ‘Girl Called Alex’ which could in less charming hands seem overly downtrodden, and stamps a personality on ‘KV Crimes’ when it otherwise sounds for all the world like a Neil Young ‘Cinnamon Girl’-type rocker.

Though gentle acoustic pop like ‘Never Run Away’ is nearly swamped by the number of lengthy almost psychedelic-jam workouts present – the gently plucked yet aching guitars of ‘Too Hard’ being perhaps the finest of them – the record’s best moment is also one of its briefest. ‘Shame Chamber’, the most Smoke Ring­-like thing here, is a shimmering, breezy pop delight that even has Vile uncharacteristically yelping “Whoo!” at the end of its singalong chorus. His exclamations are understandable – ‘Shame Chamber’ just produces that much joy.

And eventually, so does the whole record. It may take a little longer to get in to, but it’s entirely possible that once you’re immersed in Wakin’ On A Pretty Daze, you might be happy never to surface.