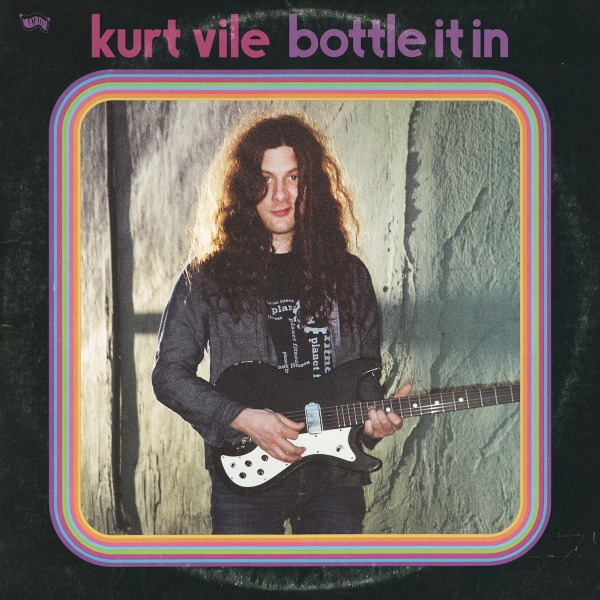 Fresh off a career-highlight collaborative record with Courtney Barnett last year – the magnificent Lotta Sea Lice – Kurt Vile has opened up all the doors for his new record, Bottle It In, to go in any direction it pleases.

Thankfully, it turns out that he’s taken the album back a step, back into the more atmospheric mode he was in on Smoke Ring For My Halo. It’s a lot more laid-back (who’d have thought that was possible?) than his last couple of solo records, and there’s nothing even remotely similar to his biggest ‘hit’ “Pretty Pimpin’”.

This is an album that focuses on the vibe, built around relaxation, whimsy and more than a hint of humour. It’s nowhere near as introverted and self-effacing as b’lieve I’m goin down, and it’s significantly funnier. It runs at just over an hour long, but feels much longer due to the generous helping of guitar solos across the record. Depending on your taste, and depending on how you like your Vile, this could be his best record in ages, or you could be a tad put off by the spaced-out, long-winded nature of it.

There’re also a few more-than-interesting things going on here, things that made the album announcement stand out from your usual fayre. Kim Gordon guests, there are three ten-minute extra-long jammers and there’s more dexterity and development in his lyrics than ever before.

He previewed the album with psych-folk bummer “Bassackwards”, which wasn’t really representative of the record as a whole. More representative would be the blissful, seemingly improvised nature of one of the other lengthy cuts, like “Skinny Mini”. He ballses up at the start of the track, before going straight back into it, and seemingly nails the take. It lends the album an air of authenticity, of looseness and playfulness where “Bassackwards” seemed a little… rehearsed?

The hilarious “Loading Zones” is an album highlight both lyrically and sonically: it has a pleasing, buoyant vibe, and a seriously funny set of words about his ninja-level avoidance of paying parking fees. The soft, airy “Mutinies” plays with the notion of pill-popping America, and it’s a gentle, introspective look inside the man himself.

Across the record, there are your usual doses of Neil Young-ian guitar fireworks, a dash of Bob Dylan, a few doses of Lou Reed/Jonathan Richman’s dry, dour drawl (and their wry witticisms), but this album – finally – sounds completely like himself.

Vile had the opportunity, with the success of his previous solo album, to make something completely polished and aim for the stars to just see where he landed. Rather than dialling back the finesse, he could have aimed for his Rumours, his Full Moon Fever. Instead, his eyes seemly firmly fixed on the road, then at the beach and then at the gutter. And it’s a thrill to join him everywhere he goes.