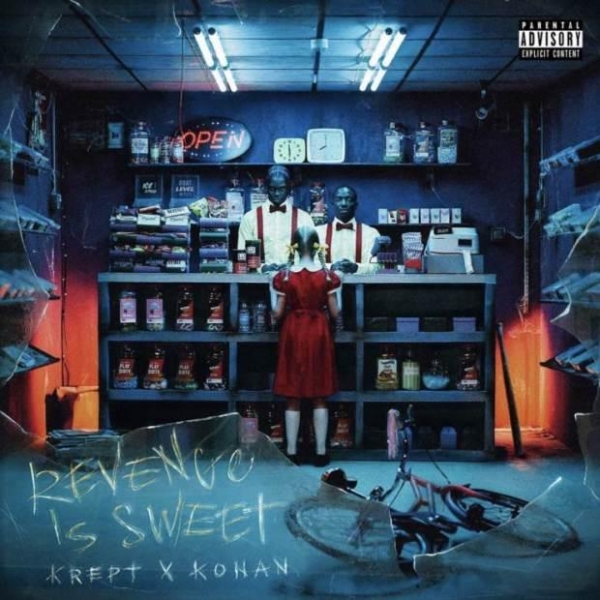 It’s no secret that grime, rap and drill has been UK music’s most fruitful genres of late.

The (loosely-termed) hip-hop offshoots have become a breeding ground for young talented wordsmiths to blend inspiration from all around them and create tracks that drive music forward. It’s important, however, that we don’t overlook the artists that helped the scene grow to the heady heights it’s at today. Fittingly, Krept & Konan’s Revenge Is Sweet – the rap duo’s second studio album – is a timely reminder of exactly why.

In the last decade, Krept & Konan have become a force bigger than music. They’ve launched a change.org petition to stop the CPS silencing musicians, resulting in them being invited to the Houses of Parliament by Diane Abbott MP invited to debate censorship of drill, launched a label, Play Dirty, and opened a restaurant in Croydon, cleverly named Crepes & Cones. Impressive. But aside from the big-in-the-game moves, the duo have been through a whole unspeakable amount of grief and trauma, including the tragic deaths of Krept’s cousin and fellow rapper Cadet and their best friend and business partner Nash Chagonda. That’s before we mention Krept being stabbed recently backstage at Radio 1Xtra Live.

It’s unsurprising then, that Revenge Is Sweet is a rollercoaster of emotions throughout, with the record starting with a serving of braggadocio on opener “Goat Level” and finishes with heartbreaking catharsis on the finale “Broski”. In the middle, we see the duo’s full range and versatility. Help comes from some big-hitters in the form of features but none are misfired attempts to raise the profile of the record. Each featured artist brings their best game and does what they do best. And in return, K&K thrive, bouncing off the energy of their fellow artists. Most notably, Stormzy arrives with his trademark unstoppable flow on “Keep Talking” – not to forget the inclusion of the late, great Cadet. MoStack brings another infectious hook on “Cheating On Wifey” and D-Block Europe – who are everywhere right now – get in on the act with auto-laden mixup on “Tell Me”.

The bouncy “I Spy” – featuring Headie One & K-Trap – has already made a commercial impact reaching the UK Top 20, but it’s the more mellow moments on the 13-track record that cut through most effectively. “Salaam”, and the Wizkid-featured “G Love”, provide clarity amongst some punchier tracks, built on a simple guitar riff or dreamy chord progressions to give an ethereal feel.

One of the biggest talking points will be the two skits that break up the album. The first discusses how ‘the best revenge is massive success’ and the second is a monologue from the rapper Ramz, in which he candidly talks about his struggles with suicidal thoughts and the stigma of mental health in men. It’s three minutes in which I sat frozen to the spot, a lump lodged in my throat.

And if that didn’t get you, the finale, “Broski” will. The track’s an ode to their best friend and Crepes & Cones business partner Nash Chagonda, who tragically took his own life after they finished the store. On “Broski”, they pour out their emotions, talking to Nash about their pride, reminisce about good times and plans. The hook: “One time for my broski / if you’ve ever lost somebody close please / put your lights up, let’s have a toast please” hits you straight in the gut but feels anthemic enough for it to be as memorable as it deserves. “Broski” hopefully brings some form of closure for the duo who have been through unexplainable amounts of grief and it’s a fitting closure to a wonderful record.