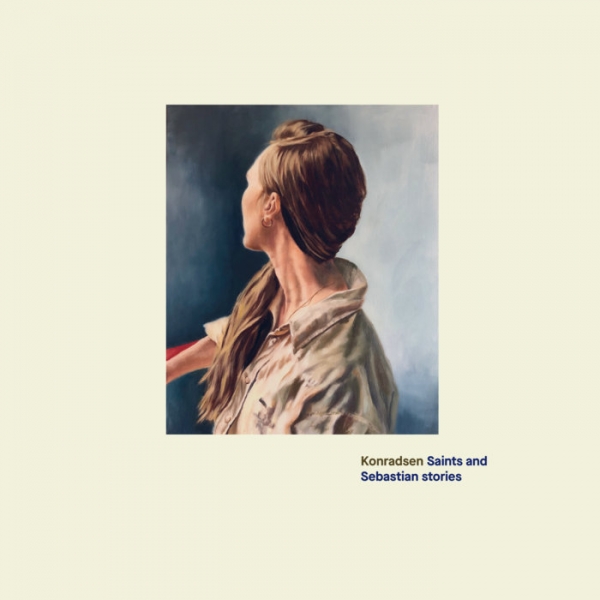 The same androgynous croon that so gorgeously allows RHYE to perform in the dark – that washes over Greg Gonzalez’s Cigarettes After Sex to keep their music mulled in anonymity, that flashes through Sequoyah Murray’s mutant soul with a polyrhythmic confidence – is an enabler in modern pop music.

With the mile-a-minute salvo peeping into celebrity gratification culture, Norwegian duo Konradsen’s debut is a calming thirteen track antidote, removing the burden of identity. Saints and Sebastian Stories plays with all the mythological dexterity of an unearthed artefact, where origin and biography barely matter.

Take the fourth A Side released in advance of the album, "Dice". Nostalgia’s a nuanced thing, of course, subject to the songs your Dad played you on the drive to school, or what you could rip onto your first iPod. But here, Jenny Marie Sabel’s tender vocals extend through the most niche references, her piano keys have the gentle echo of Marble Sounds and early Death Cab For Cutie, before all of the lightly libertine charm summoned up is deftly cracked by an out of tune trumpet, interjecting field recordings, and samples of speech from family and friends. In ‘Big Bruce’, the base of that recording is an old VHS tape from Sabel’s father, of a family friend impersonating a televangelist. The meditative textures of friendship and familiarity sound like an audible equivalent of the most breath-taking Japanese kintsugi.

"Baby Hallelujah" is another stark standout. It’s the simplest and most human track on the album; Sabel’s austere vocals meander around ideas the afterlife with the childish inquisitiveness of standing on the highest step of a ladder to see what treats are laid out on the top shelf. Eirik Vildgren’s vocals join on "Warm Wine", with crystalline electronics built around a modest guitar strum and the small but definite teasing of a dance track. Programmed beats are still packed with ambience, and the grandest, most pastiche narratives feel soothing.

This is the to and fro that builds through the rest of the album; when vocal and acoustic indulgence could take over, the crashing cymbals and brass of "Red To Rhyme" squeal into a sonic orbit of one of the many planets around Bon Iver's 22, A Million. When instrumental indulgence could take hold, the sheer human-ness of the vocal harmonies on "No One Ever Told Us" and "Odd Mistake" – like an Empress Of LP being played at half-speed – demand an eco-friendly spotlight and our full concentration.

You can come here for the unsuspecting pop songs, the meditations on traditional Scandinavian folk music, the strange humour and infectious friendships. Against the great abyss of tangled internet information, Saints and Sebastian Stories is an unobtrusive gem.