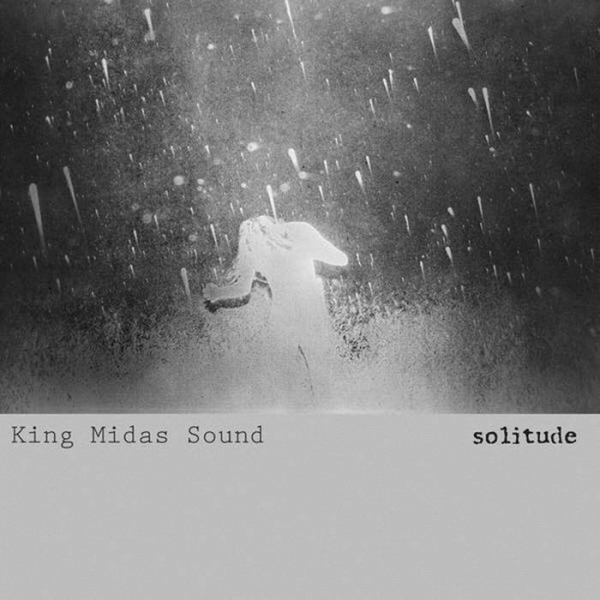 Fear and loathing in an empty room.

Released on Valentine’s Day, the latest album from King Midas Sound is an exorcism of loneliness, about as bleak a nod to the holiday as you can imagine. It is an aimless wandering in half-light, an echo of a ghost.

The break-up album is an overdone tradition. It was always so. The loss of love is the eternal muse of popular music. Solitude attempts to bury the form in a sarcophagus of concrete once and for all, through a form barely connected to those pop traditions. To listen is to be swallowed whole in the deepening blackness of a life lived and mourned, to have your attention so totally subsumed that no matter what the context you are dragged into its hellish pit.

The blueprint for the record has The Bug conjure a largely beatless soundtrack to Roger Robinson’s overwhelming screenplay of despair (Kiki Hitomi has left leaving only the original pair). There are sparse reverberations of rhythm here, but for the most part Robinson’s poetry is left suspended in icy stasis, drones pulsing unhurriedly. On “You Disappear” the words melt “like ice on the trees that falls like teardrops,” just as does the object of his longing, as synthetic twinkles yawn into the mist

What follows is an unflinching deepdive into the pathos and disgrace of a man left alone. The protagonists (or shades of the same one) which populate the record are not always gendered, but there is something about the grim, futile aggression of wounded masculinity that puts a male spin on these gargoyles that haunt KMS’ world. “In The Night” finds him turning to the animal within, “crav[ing] the taste of raw meat,” “doing pushups… to bring [him] back into [himself], the breathlessness, the pain,” and shouting the lost’s name into Loch Lomond until he is hoarse. On “Who” he wanders embittered, tracing her every move and wondering “who is she sleeping with now?” with the cold calculation of a stalker intent on harm. The latter is particularly uncomfortable, placing you sympathetically in the mind of a grotesque.

When listening to this record I found myself drawn to Mark Fisher’s Ghosts of My Life, a book which interprets the present as unable to escape the spectres of a past that has ceased to be and of the futures lost to paths since closed off. More than that; culture, society and politics are haunted by the loss of any future, as alternatives to late capitalism are discounted before their concenception and the constant presence of nostalgia abounds in everlasting connectivity.

Fisher talks of this haunting as the product of failed mourning, and Solitude is awash with the same sense of being stalked by the past and by forgotten futures. The feeling is one of undeath, unable to go back or move forward, the scenarios uncannily lived-in but without life.

One of the most startling moments on the album is closer “X”, wherein Robertson’s narrator joins the object of his desire’s other former lovers, the other ghosts that haunt her and are in turn haunted. “My name is X… I am a part of all your exes. Look at us now all having Pad Thai and deconstructing all your issues… each gripe aired is met with ‘me too’ and ‘don’t you hate that’.” The mundanity of the scene, shrouded in the ominous swells of The Bug’s instrumentation, is devastating in its finality. None of these characters have any desire to go anywhere, and the glee with which they wallow is terrifying.

Solitude is not an easy record to enjoy - even in writing this review I was reluctant to return to it. Its grief is visceral, and most disconcerting of all, most listeners will find themselves identifying with some ogre held within these tracks. Listening hangs you upside-down, bat-like, to cling to the darkness with them, which is in turns deeply uncomfortable and oddly cathartic. A brilliant and awful trip.