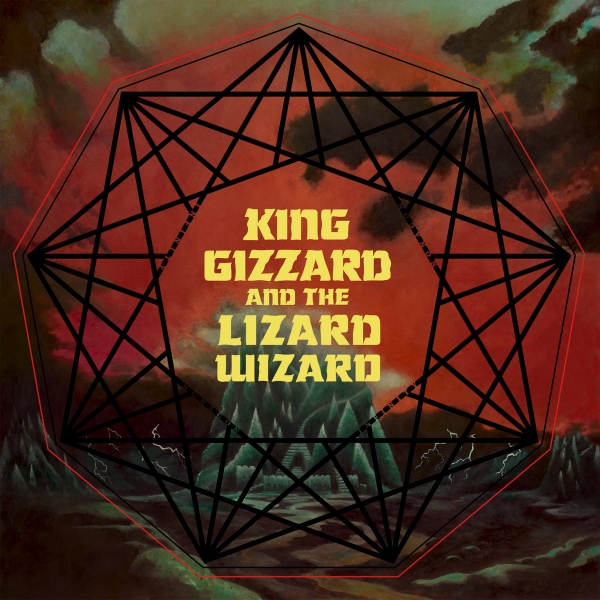 You’d expect a band such as King Gizzard & the Lizard Wizard, with a stage-cramming seven members and a name that sounds like it was conceived by hysterical teens in a haze-filled shed, to be either all over the place or jokers of the avant-garde form. What they prove on Nonagon Infinity, their fourth full-length for the legendary Heavenly Recordings in just under a year and a half, is that they are, at least, both of those things.

Usually, the fact that a band has released so much music in such a short space of time would reveal an obvious decline in the effort put into the album, and, as a result of this, the quality of the albums themselves - desperation for a creative fix interwinds with pressure, resulting in a half-arsed filler album, much to the chagrin of the band’s label and fanbase alike. But, as you should know by now, King Gizzard don’t conform to what a run-of-the-mill band is or what they’re told they should be.

Nonagon Infinity’s USP is that it claims to be the world’s first never-ending album, meaning that the final song links straight back to the first, and each song between the start and finish seamlessly flows into the next. It’s ambitious, sure, but it’s also hard to imagine people embracing this idea fully - it appears to be more of a marketing gimmick than anything else, although having the tracks practically connected to together does enhance the album by making it flow as smoothly as possible.

The main risk of having the album’s nine tracks seamlessly flowing into each other is that if you can’t tell when one song has finished and the next has started, then surely that means they all sound the same, right? Wrong. The band claim that this album is partly inspired by heavy ‘70s metal like Black Sabbath and Metallica, but a more obvious reference point would be the experimentation of krautrock, meaning that each track sounds essentially different, but easily unite with the surrounding tracks it due to its core sound running throughout.

“Evil Death Roll” and “Invisible Face” recall elements of Cosmic Jokers’ Gaclatic Supermarket, mainly through its fetishisation of space and the universe, but also the fact that the songs just sound like studio jams thrown onto an album (Gizzard's live shows are notorious for their improvisational jams). There’s also a likeness to Association’s album Earwax, and most notably the song “Spider”, whose distortion and avant-garde free-jazz crawls through opener “Robot Stop” and “Mr. Beat”. They're just a few ingredients in the potent potion that the idiosyncratic Australians are serving up here, but, overall, it’d be fair to say that Nonagon Infinity sounds like Help-era Thee Oh Sees on a bad acid trip.

The creepy fairground soundtrack of last year’s brilliant Paper Mâche Dream Balloon was a mind clearer for the band, an unexpected all-acoustic effort that eventually helped them find the sound for the new album. King Gizzard’s first album for Heavenly, 2014’s equally brilliant I’m In Your Mind Fuzz, is Nonagon’s closest relative in their ever-extending family of a discography, and seems like the main starting point for the sound of Nonagon, providing them with a proven pallet to start painting. However, the finished painting is a portrait much more abstract, vigorous and weirder than ever before. And, for a band that’s released an EP of four tracks (last year’s Quarters) all precisely consisting of 10 minutes and 10 seconds each, that’s saying something.

King Gizzard’s modus operandi and method of maintaining relevance has always been unprovoked metamorphosis - despite their often too frequent output, it’s King Gizzard’s constant reinventions and quirks that keep them entertaining. Their music can, at times, sound creepy, swinging more towards the psychopathic than psychedelic side of things, but that doesn’t matter because Nonagon Infinity’s sound is bordering on the extraterrestrial - it sounds like they’ve given kautrock an intense, life-threatening electric shock, while simultaneously floating through 41 minutes (or your entire lifetime, dare you interrupt the endless loop) with the elegance and unpredictability of a kite in the sky.