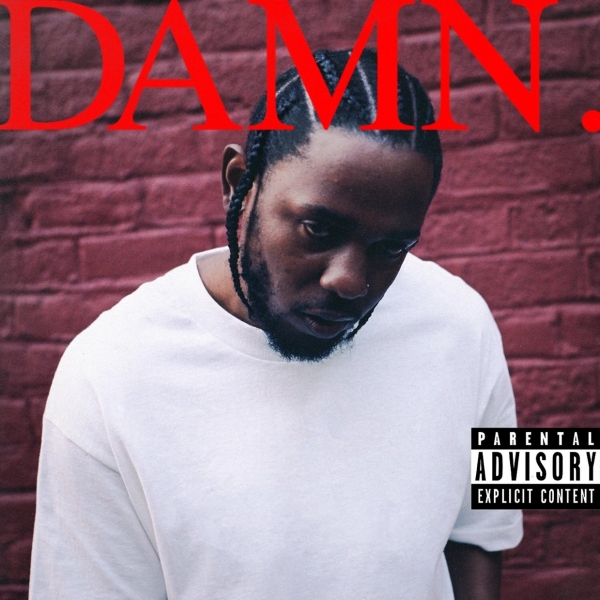 DAMN is a multilayered word. It expresses displeasure, but also encapsulates surprise.

It can be both spit out in anger, the D and the A combine to make a hard thud, or it can come out low and slow, with despondency coming from the distasteful yet foreseen. Said just right, with an upward inflection, it can be positive. To Pimp a Butterfly gave Kenrick a kind of spokesman status for the young liberal and, with the election balloons slowly deflating on November 9th it was uttered in each of these ways and more: but my reaction was “damn… wonder what Kendrick’s gonna say about this”.

A keen eye for detail means, even before the first track bumps, Kendrick nods to the themes inside. The cover of Good Kid M.A.A.D. City was a dog eared polaroid of his mother’s old van; inside a collection of stories from his childhood, about Compton. To Pimp a Butterfly reduced ad absurdium the Compton swap meet he promises to set up on the white house lawn on "Wesley’s Theory": the opening track on a deeply political album, multiple characters tussling with the dichotomic abuse of blackness in Obama’s America, mirrored by the self loathing his survivor’s guilt fuels.

DAMN’s cover is just Kendrick. Sad eyed in almost meme form. It’s basic, and back-to-basics is the form DAMN. takes. Essentialist all-cap track names read like the hood periodic table: "GOD." "LOVE.", "LUST.", "FEEL.", "LOYALTY." "FEAR." "HUMBLE." "BLOOD." The contents don’t have the same narrative arc, but the intensity has been dialled up, the unfettered talent ever on display and the mutable live jazz, free form consciousness brought down to street level: banging and boom bap. What shines through is sheer force of will, and of talent turning its roving eye inward. Gone are the plurality of voices, the characters and community of before. Kendrick is speaking for himself.

Whipcrack 808s claps and rattling sub bass characterise the production of Mike Will Made It on "DNA", "HUMBLE" and "XXX", forthright and unapologetic, all three slapping like a beaten chest. Opener DNA is a visceral defence of himself, his craft and his origins in the face of Geraldo Rivera’s Fox News criticism, sampled on the track. The charge that Lamar, spitting “we hate po-po/ when they shoot us down in the street fo-sho” has “done more damage to young African-Americans than racism” is taken to Kendrick’s home turf in the guise of a war dub. As throughout it’s an unflinching, complex portrait - he’s got “loyalty, got royalty inside my DNA/ cocaine quarter piece got war and peace inside my DNA”, and goes on to unpack the origins and psychology of his world; returning fire. Rivera’s problem is not his rap. It’s his reality. And when his words, quoted above, float into focus Kendrick foams at the mouth over Rick James screaming “gimme some ganja” - blowing bunt smoke in Rivera’s face as he counts the ways his DNA has made him who he is: the grammy winning superstar

The track fades out with the words “Peace to the world / let it rotate/ sex, money, murder/ our DNA”, giving the track a broader reference point. Perhaps DNA. could be taken as foundational to DAMN. In defence of his community, he uses himself as a case study - but to do so he must be representative. Thus much of the album is centred on maintaining his roots, remaining humble and being true to himself: keeping it real.

This is something "HUMBLE." tackles explicitly, yet finds Kendrick as divided as ever. Converse to the woozy "PRIDE" which it follows it has a tight wound, swaggering boom-beat beneath exhortations to “sit down/be humble” amidst brags that Obama just paged him and haughty demands to “Get the fuck off my stage”. Railing against photoshop he begs for something real - “Show me somethin' natural like ass with some stretchmarks” but far from deterring him he “still will take you down right on your mama's couch in Polo socks”. It’s not necessarily a fight for humility, his brags are numerous, but a fight for realness in a world of instagram irreality, summed up by the phrase “I don't fabricate it, ay, most of y'all be fakin', ay / I stay modest 'bout it”.

True insight into intentions come on "FEEL" and "FEAR." "FEEL" is an introspective and intimate portrait of a man disintegrating in front of myriad challenges faced as the spokesman for a liberal movement. Each line begins with ‘I feel like’ - and he ticks off the ills of the world - drugs (“Feel like the feelin' of no hope / the feelin' of bad dope”) and its link with incarceration (“The feelin' of false freedom / I'll force-feed 'em the poison that fill 'em up in the prison”) and enemies on all sides (“I feel like you may be the problem/I feel like there ain't no tomorrow, fuck the world”). In terms of flow, this is perhaps Kendrick’s high point as he takes off over the last third spitting syncopated compound rhymes pillioring the degradation of society and lamenting that “I feel like the whole world want me to pray for 'em / but who the fuck prayin' for me?/ ain't nobody prayin' for me”.

"FEAR" on the other hand, tells the story of Kendrick’s neuroses with a ten year latency - the first coming age seven through stern maternal threats to “beat yo' ass, keep talkin' back / I beat yo' ass, who bought you that?”. At seventeen, his fears had changed, to any number of inconsequential reasons to die alone on Compton streets: ‘'ll prolly die anonymous I'll prolly die with promises / I'll prolly die walkin' back home from the candy house / I'll prolly die 'cause these colors are standin' out’. These fears are physical, primal, exposed by blunt repetition of the first line - yet when he reaches 27, the age at which he released To Pimp a Butterfly, his fears become more complex. ‘At 27 years old, my biggest fear was bein' judged/ how they look at me reflect on myself, my family, my city/ what they say 'bout me reveal/ if my reputation would miss me’. Here his fears are informing his art, and the final verse tackles DAMN, namechecking track names - "PRIDE", "DNA", "GOD", "LOVE" and "HUMBLE" - painting it as a form of therapy - I'm talkin' fear, fear that it's wickedness or weakness / fear, whatever it is, both is distinctive/ fear, what happens on Earth stays on Earth/ and I can't take these feelings/ with me so hopefully they disperse/Within fourteen tracks, carried out over wax/Searchin' for resolutions until somebody get back.’

He is the man on the cover, a man struggling to reconcile being the king, with his need to remain Kendrick from the block. The pyrrhic victory won on To Pimp a Butterfly proves to weigh heavy: his revolutionary songs, empowering, now seem part of a losing battle. The task now seems enormous. Yet he is young and black, he is from Compton, he is working class by birth, despite his success. That’s why he agonises so over keeping it real, because as long as he does, through that speaking still shines each one of those groups he belongs to: a voice who understands their struggle. This shines on the album’s closer and crown jewel, taking his birth name of "DUCKWORTH", telling the story of how his label boss and father met once, as Top Dawg robbed the KFC where he worked. He left him unhurt: ‘Ducky’ used to give him free food whenever he came in.

There is no realer representation of the daily tightrope of life in Compton. The life and death lottery inherent in his community, and the twists of fate upon which everything rests. As Kendrick puts it: "You take two strangers and put ‘em in random predicaments/give 'em a soul so they can make their own choices and live with it/twenty years later them strangers might meet again/Inside recording studios where they reaping the benefits/then they start reminding 'bout that chicken incident/whoever thought the greatest rapper would be from coincidence/because if Anthony killed Ducky, Top Dawg could be servin’ life/while I grew up without a father and die in a gunfight".

The album has its welcome lighter moments, namely on "LOYALTY" and "GOD:, but pragmatism, faith and fate keep it real throughout. And living in a certain neighbourhood, or living a certain way, carrying a gun or selling drugs is immaterial to keeping it real. It’s about remaining representative, and retaining the power to represent. Damn is an album of bangers, but also an album of ever imperfect portraits told with supreme skill: loving and loathing and doing the wrong thing as often as the right. But that’s real. And through unflinching depiction, reality is revolutionary too.