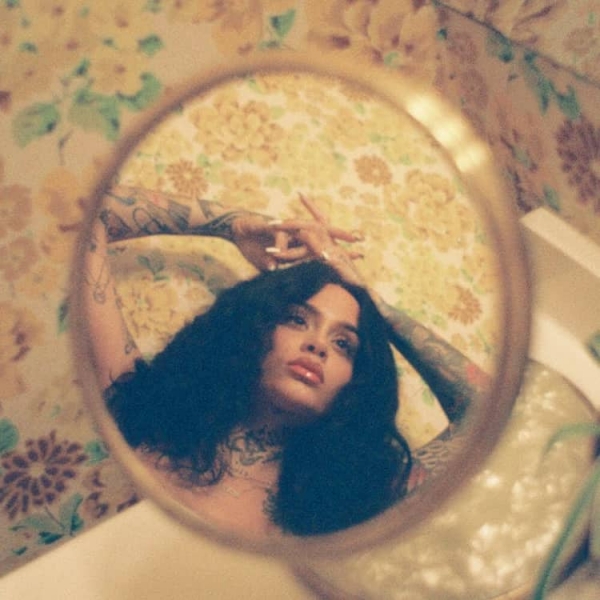 Yet, as tempting as it is to read While We Wait, Kehlani’s new nine-track mixtape, as symbolic of pregnancy, it is instead another distillation of everything she has already established musically. It is a triumphant offering of high-production R&B, which calls out poor behaviour in relationships and prioritises the assertion of confidence.

The glorious opening song, "Footsteps", is quintessentially Kehlani. Using the beat from Omarion’s "Ice Box", she admits "neither of us knew what we wanted", setting the tone of the mixtape as one ready to deal with pain and uncertainty. In Musiq Soulchild’s verse, he admits "I treated you like medicine", tapping into the growing narrative of women-as-therapy. The romantic chorus line, "I left footsteps in the mud so you could follow me", is about feeling closer to the one you love after admitting things went wrong, which is exactly the opposite agenda to what we might expect from a ‘pregnancy’ album. Kehlani is setting up an R&B classic.

In "Too Deep" we are submerged, and the sonic quality of water droplets means we don’t really have the appetite to swim to the surface. Kehlani’s layered vocals and simple lyrics - "this shit’s getting too deep’ - make us want to stay under water, enjoying the disconnect from reality. It’s the perfect set up for the album’s third track and stand-out song.

In "Nunya", we realise that Kehlani commands a genre all of her own. This is her doing what she does best. The best part is the ethereal hook, sharing the lines "You put on a show / ’Cause you don’t want the world to know / That you lost the girl who got it on her own". Her messages are sweet, sexy, and savage; not unlike those of Destiny’s Child or TLC.

While We Wait is committed to elevating confidence, whether in the form of walking away from unhealthy relationships or having little tolerance for anyone who doesn’t accept your whole self. In "Morning Glory", Kehlani gives the middle finger to a man who disapproves of her look without makeup and a wig. The song ends with rap, the pace of which reminds us of Lauryn Hill (whose portrait is tattooed on Kehlani’s arm). She coolly states, "Don't need a outer confirmation from my man / Who uses 2-in-1 and thinks he's a sensation".

The image of motherhood, particularly that which is placed on famous women, is one of slowing down, "wholesomeness", and becoming "motherly". Yet Kehlani’s latest project doesn’t veer from the themes established in her previous works; it expands on them, refines them, and grows with confidence each time. In a somewhat comparable way to Cardi B breastfeeding her daughter, Kulture, in the video for "Money", Kehlani reimagines the opportunities of motherhood. She asserts her right to remain herself, pumping out ethereal R&B, spacey vocals, and addictive hooks (see "you gon’ get my hopes high girl" from "Nights Like This"). If this is what burgeoning motherhood looks like, then it is not a manufactured, diluted, and palatable version of oneself. Rather, it is an extension of an existing strong character, and in Kehlani we celebrate the power of a mother who isn’t afraid to say what she really thinks.