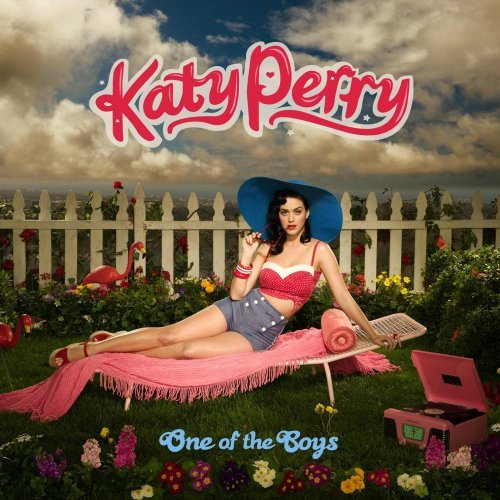 Last time I checked, Last.fm had no less than 66 photos of Katy Perry on offer.

These weren't gloomy pictures taken from across the street at 3am as she left a bar or something -“ these were glossy, pixel-perfect publicity shots, each showing this Californian pop product in a different outfit, ranging from party girl to, bizarrely, sailor (incidentally, she didn't look like one of the boys in any of them). As much as anything, this abundance of media savvy helps demonstrate what a synthetic construct Katy Perry the artist is -“ hell, her real name is Hudson, she just changed it to sound unlike Kate Hudson, the actress. After all, what use is fame if your name sounds like somebody else's?

In keeping with this, One of the Boys is a delicately calibrated pop missile designed to cause massive chart casualties. What all the people involved on the album realise very well (and there are lots of people involved besides Katy Perry) is that controversy can help achieve those commercial aims -“ and so, enter songs like the now infamous 'I Kissed A Girl' and the soul-destroyingly titled 'Ur So Gay'. The crass mixed messages these songs give out in combination is only the tip of this album's iceberg of tastelessness, which is frankly riding pretty low in the water. On the title track, Perry boasts that she can "belch the alphabet", whilst on 'If You Can Afford Me' she comes across as a spectacularly greedy gold-digger. Contrast these with cutesy, vapid slower numbers like the amazingly uninspiring 'Thinking Of You' and 'Lost', and the album comes across as a deeply cynical corporate cash-in.

To be fair, there are some redeeming features amongst the incessant, excessive big-money gloss and trashy themes. 'Hot N Cold', whilst committing another heinous grammatical crime, is possibly the album's best song -“ a simple but fun piece themed around indecision, with a huge, juicy chorus and a below average batch of crassness. And for die-hard fans of commercial pop, there is more to like here. Those two controversial first singles, whilst a bit baffling and crude, are examples of the single-minded pop-domination mission here -“ if you can turn your mind off, there's some simple fun to be had.

Ultimately though, One of the Boys leaves an unexpectedly bitter taste in the mouth. Not because it's bad -“ I mean it is, it's pretty unoriginal, vacuous pop for the most part, on a strictly musical level -“ but because the themes, ideas and lyrics are just so crude, so blunt, so tacky and even verging on grotesque. Much of the time Perry sounds like a drunk, spoilt, sexuality-confused bimbo on this record -“ amusingly ironic considering that at the tender age of sixteen she released a Christian-themed album. No amount of studio polish or celebrity songwriters can save this -“ if you're the kind of person who reads music reviews, you're almost certainly not the kind of person who will want to buy this.