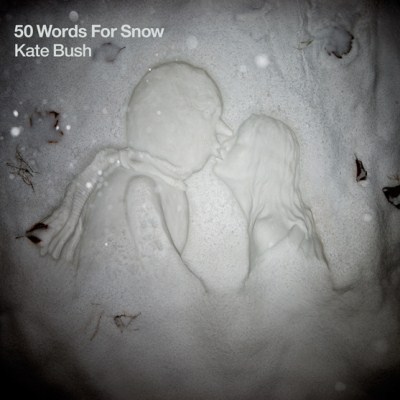 To deem the second installation of Kate Bush‘s 2011 comeback a “Christmas album” would be more than a little off-target. Perhaps it’s Scrooge-like to deny its festive merit, but the seven-track collection is far from the novelty ‘I Wish It Could Be A Wombling Merry Christmas Every Day’ approach to a Christmas release. After all, there isn’t a jingle bell nor a flashing Santa hat in sight.

After Bush’s release of re-recordings earlier this year, 50 Words For Snow marks her tenth studio album after a six year hiatus. Whilst clearly standing its ground as a winter-influenced album, any of the more jovially twee aspects of the chilly months are firmly wrapped away. Every song, whether overtly or subtly, seems to tell a solemn tale with a lonely and melancholic ambiance running throughout. Nevertheless the record is anything but frigid; and drifts effortlessly in and out of a twinkly piano-based backdrop, its delicate vocals complemented by jazz-flecked drums.

Supporting vocals come from Kate’s son Albert “Bertie” on ‘Snowflake’, his celestially clear The Snowman-esque vocals contrasting with his mother’s breathy tones. Elton John and Stephen Fry also make foolproof cameos in ‘Snowed In at Wheeler Street’ and ’50 Words for Snow’ respectively; although the latter does come across as a little too predictable. Although comfortable on a bed of tribal beats, the track simply does what it says on the tin and little more. Ranging from the ordinary (“white-out”) to the graceful (“Wenceslas air”), the count-down of increasingly surreal terms seems to exist principally for the sake of justifying the album’s title.

The highlight of the album, ‘Lake Tahoe’ opens with a luscious operatic duet and sails off into beautiful lulling waves of warm, soft piano and sustained strings. This spacious tranquility contrasts with the song’s tale of a ghostly woman rising from the depths of the Californian lake “wearing Victorian dress”. Myth has it that Tahoe’s depths are lined with illicitly dumped bodies, perfectly preserved due to its extreme temperature.

A yellow spot in the more-or-less unblemished whole picture rears its head in the 13 minute long ‘Misty’. Whilst Bush’s vocal is refreshingly raw and gritty, a distinct awkwardness meets these slightly-too-literal depictions of a night of passion with a snowman. She leaves us no clues as to the reasoning behind the surreal fantasy, describing his mouth as “full of dead leaves / and bits of twisted branches / and frozen garden”. Prudishness aside, Bush doesn’t leave much to the imagination with this bizarre narrative, concluding with the universally-dismal lines of ”Sunday morning / I can’t find him / the sheets are soaking”… It could almost be the subject of a French & Saunders Christmas Special spoof, perhaps accompanied by a censored music video.

While the rest of the album fails to rise to the complexities of ‘Lake Tahoe’, 50 Words For Snow is another stepping stone away from the interpretive-dancing-in-a-field Kate Bush of yore. It proves her credentials of distinct maturity as well as exhibiting her ability to experiment successfully with deep-set and sombre but thoroughly captivating music.