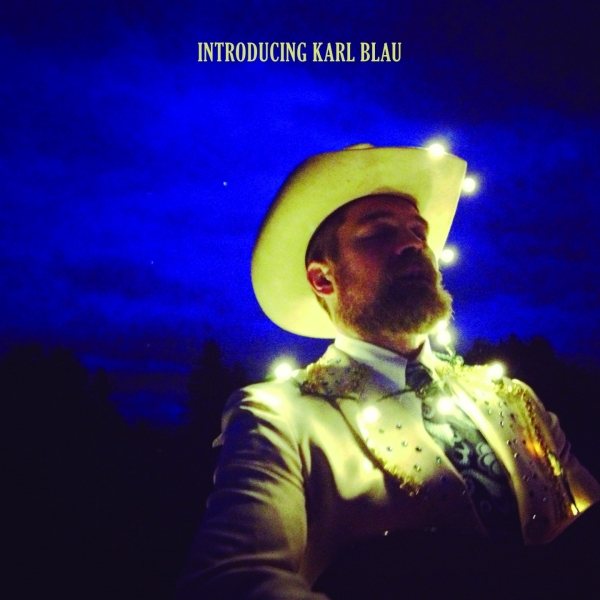 “Here are 20 years of recordings,” runs the short blurb on Karl Blau’s Bandcamp page. “Check ‘em out - no two alike!” He’s not wrong. There are lo-fi excursions into afrobeat, campfire folk. disjointed post-punk and comforting indie rock without ever resorting to straight-up pranksterism. Karl Blau boasts a discography that is prolific and creatively restless, almost to a fault

Slickly recorded by Decemberists/Sufjan Stevens/My Morning Jacket producer Tucker Martine, and coming out via Bella Union rather than longtime label K Records (or handmade self-released CD-R), Introducing is the sound of Karl Blau smartening up his act and shoo ting for the big leagues. Tasteful without being too conservative, you still can't help but wonder just how straight he's really playing it, even though you can practically hear the booking team at Later... With Jools Holland falling over themselves to find Blau's address.

Not unlike Bowie's mid-seventies excursion into smooth Philly R&B, Blau's latest tackles a new genre head-on. Comprised of ten reverentially performed covers of songs written by country legends like Waylon Jennings and Tom T Hall, Introducing finds Blau backed by a crack cast of seasoned sessioneers and guest vocalists like Jim James and Laura Veirs to get the tone just right. If Young Americans was was Bowie's "plastic soul" era, this album heralds the birth of Karl Blau, the plastic cowboy.

All of this would be cause for concern if the album weren't so damn good. As if from nowhere, Blau has revealed himself as being in possession of a melifluous country croon worthy of The Nashville Greats. Yet, it still sounds like he's doing country his way. "Fallin' Rain" - a daring choice of lead single, given its near ten-minute running time - stretches Link Wray's homespun, three-chord original to a sultry, funky, string-drenched breaking point. The reverie is only broken when Blau's voice cracks as he sings about "stabbings and shootings and young men dyin' all around." It's not hard to think the decision to record the track was a little more pointed than simply tipping the stetson to rock and roll's founding father.

The influence of Introducing's producer can't be overstated here either; his father Layng Martine Jr was himself a country songwriter, and his "Let the World Go By" appears here - a world-weary, harmonica-led counterpoint to "Fallin Rain"'s apocalyptic groove. A hushed take on Townes van Zandt's "If I Needed You" - not exactly a song which was crying out for yet another rendition - rambles along beautifully. Meanwhile, early Bee Gees standard "To Love Somebody" is turned into a joyful riot in Martine's hands, with a full-tilt gospel choir echoing Blau's lovestruck vocals.

The most impressive thing about Introducing Karl Blau is how easily it could find itself slotted in the second-hand racks between Charlie Rich or Glen Campbell. They don't make 'em like this anymore, and nor will Blau - a more raw, garagey new LP is already in the can, which makes his imminent UK live dates a particularly intriguing prospect. Still, much like the restless characters in these ten songs, it's not uncharacteristic of Karl Blau to want to keep ramblin' on for a while. Just be grateful he stopped somewhere that looked suspiciously like Nashville before he decided to saddle up again.

Karl Blau and his band will headline The Lexington, London on September 6. Proudly presented by The Line Of Best Fit. Tickets are on sale now.