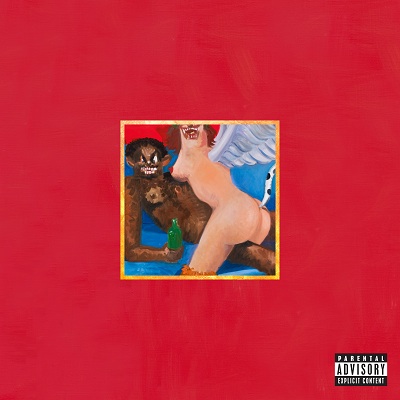 Trying to sum up the man (or arguably the caricature of) Kanye West in just a simple utterance of clever and witty superlatives is nigh on impossible.

His controversial rants like the ones targeted at Taylor Swift or the former president George W. Bush and the never-ending egostical blog posts have resulted in him being villified as a narcasistic blabbermouth. However, this is the same man who rather contradictory has being behind some of the most creative and successful hip-hop records of the last decade. It’s this kind of split persona that’s made him the butt of many U.S chat-shows hosts jokes and even seen him immortalised as a pretentious fool on South Park.

And in true artistic form My Beautiful Dark Twisted Fantasy is an LP that celebrates those schizophrenic mannerisms. But it must be noted that this isn’t quite the LP (some would have you believe) where Kanye admits all of his mistakes and begs for forgiveness - with both swagger and self deprecating woes being present throughout. For every few admittances, there’s a sneaky claim of brillance:


“And I’d just blame everything on you”

“At least you know that’s what I’m good at”

‘‘And I’m bout to take it to another level bitch’‘


It’s a lyrical masterstroke that results in the listener being left in a bewildered state throughout the LP, trying to guess if he’s truly sorry for his past actions, or if he still thinks he’s the musical genius many claim him to be. Luckily for West Fantasy sees his musical output finally match his claims of self-greatness. It’s rumoured that album costs ran past the 3 million mark, which if true is no surprise,  with the production being a grandoise, ridiculously-melodic, boundary-smashing and optimum affair.  Each track is an event, every sample/sound feels like it was meticulously placed and tweaked by West. It’s a culmination of all the work he’s previously done; as if past musical productions have  being nothing more but a way of honing his skills, in anticipation for this all along destined carrer-defining moment - his Sistine Chapel if you will.

John Legend collab ‘Blame Game’ piano melody is reminiscent of the type of production fans will remember from the days of Late Registration however the swooning strings and heartfelt lyrics take it to the next level. Half-way track ‘All of the lights’ is the most undeniable manifestation of Kanye’s midas production touch, the one you feel he’s being dying to bring to life since day one. It has a 12 artist long credit list (varying from Elton John to Elly Jackson) that somehow sounds structured, a euphoric brass section and rapid-fire drum n bass samples, it’s as amazing as it sounds. Sci-funk track ‘Gorgeous’ sounds like it could be on Kid Cudi’s latest album (not a bad thing), the tribal-drum beats that leads the A-List Rap-Pack  in ‘Monster’ would be the highlight of the track if it wasn’t for Nicki Minaj’s showstopping wacko-animated vocal delivery.

But personally as a long-time Kanye fan it’s the final track that’s the most impressive, ‘Lost in the World’ uses Bon Iver’s ‘Woods’ as it’s core with it’s beautifully auto-tuned drenched vocals but by the time it’s finished it’s a big musical spectacle, with gigantic hollering backing vocals courtesy of Dwele and Kanye’s quick-witted lyrical flow.

My Beautiful Dark Twisted Fanstasy is Kanye’s long-awaited opus, a work of art that sees him finally reach the potential that was clear for all to see in College Dropout. Who cares what he’s like as person when he’s creating music as aspirational and awe-inspiring as this.