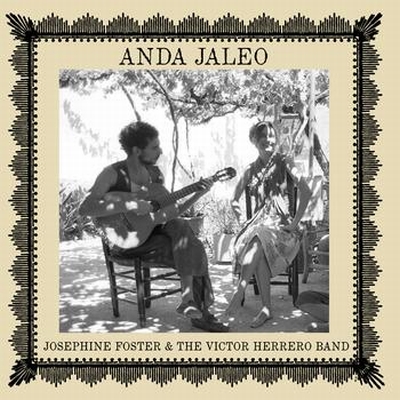 If there’s one thing guaranteed to put me off an album from the onset, it’s the vocals being recorded in a language I don’t understand. Admittedly, as a bit of a pleb Brit, that’s every language bar English and GCSE level French. Despite an academic hiccup and the pervasive feeling of guilt, the issue stands; I put too much credit in lyricism, and so when a record includes warbling about something (anything) that I can’t appreciate, usually the whole thing becomes pointless to me.

It’s a nice surprise, then, that Josephine Foster & the Victor Herrero Band have produced something that transcends the problem; a Spanish sung album that is as much entwined in social history as it is an ethereal and otherworldly holler. Translating the album would be a crying shame, not just because of the powerful ring the foreign words emit, but because the music is steeped in Spanish history.

Anda Jaleo is a collection of songs based on the work of legendary socialist poet Federico García Lorca. A Granada born literary pioneer, it’s widely believe that Lorca fell victim to the Fascists during the early stages of the Spanish Civil War. Fittingly, “anda jaleo” translates to English as, “come on, commotion!” It’s a pensive, bold statement to make in the wake of the album’s topic.

Foster’s vocals, met by husband Herrero’s frantic and raw gypsy-band orchestration, demonstrates the sense of urgency in the music’s message well and carries Anda Jaleo to an elevated state. From the melancholy harmonies of opener ‘Los Cuatro Muleros’ and ‘Zorongo’ to the enthusiastic prowl of ‘Las Tres Hojas’, the songs embrace traditional Spanish folk music and emit an overpowering emotion. Most intriguing of all is ‘Los Mozos de Monlean’, where Foster lends her wisdom to spoken word. I don’t have a clue what she’s saying, but she’s saying it extraordinarily well.

Of course, if it weren’t for a footnote on the inlay explaining the cultural significance of the songs, I’d be somewhat less enthusiastic about this material. The language is without a doubt a barrier, but Foster and Herrero’s outstanding musical effort means that I can’t bring myself to criticise Anda Jaleo for daring to embrace something beyond our fair isle.