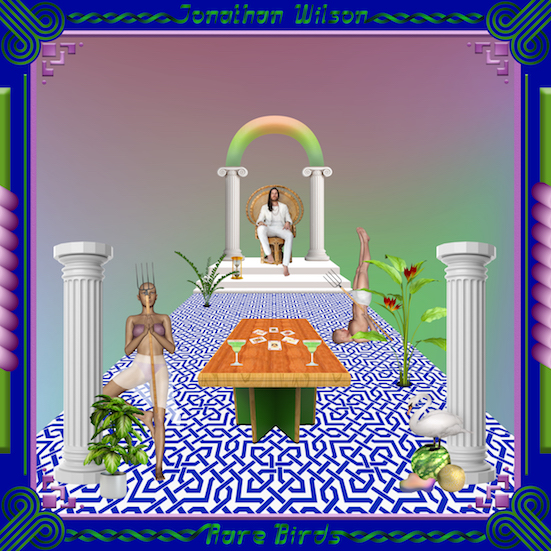 Apart from a fascination with Los Angeles lore and a keen ear for vintage American FM rock smoothness, it's hard to fathom what Wilson and Josh Tillman have in common. Whilst the latter's output is characterised by an air of a detached satirist observing the end of days with a knowing smirk, Wilson - self-styled revivalist of the hippie-era days when Laurel Canyon pulsated with beards, acoustic guitars, jam sessions, dope smoke and hearts worn resolutely on sleeves - is sincerity personified, a throwback to a bygone era when soul-baring, peace-loving singer-songwriters ruled supreme and the concept of ironic detachment had yet to be dreamed up. That the ensuing music has often matched its vintage singer-songwriterly inspirations has allowed Wilson's output to hover far above fellow travellers on the time-warping retro fantasy express. Wilson obviously means it, which elevates unfashionably idealistic lyrics such as ''there's a lust for peace and righteousness in the air'' (on the almost ABBA-esquely breezy of "There's a Light", one of the many highlights on Rare Birds) from potentially corny to really quite convincing and moving.

Rare Birds finds Wilson ditching many of his well-honed points of reference in favour of more contemporary inspirations. Not totally cutting edge contemporary, however: Wilson's spoken of being inspired by such brooding 80's purveyors of deep studio tans as Talk Talk, and there are hints of the shiny soft rock that hippie era titans gradually turned to on the simultaneously worn-out and soaring "Living with Myself" (featuring Lana Del Rey on backing vocals). At first, it's difficult to know what to make of, say, "Hard to Get Over", a claustrophobic, electronically clattering second cousin of Yes' "Owner of a Lonely Heart". Keep listening, though, and Wilson's gamble pays off handsomely. The likes of the magnificent mid-tempo melancholy-fest "Me" - elevated by a sparkling instrumental mid-section that is destined to be counted amongst 2018's prettiest moments - are easier to associate with Wilson's past templates. However, the likes of vintage synth-saturated, icy glide of "Over The Midnight" - subtle echoes of War on Drugs, perhaps - sound completely fresh, with Wilson's resolutely organic ideals given a subtle electronic and synthetic sheen whilst still retaining their core principles of warmth and live-sounding dynamics.

It's not perfect. Encountered with Laraaji's scat singing - which ends up working, once your ears stop trying to pretend it's not happening - sprinkled all over the woozily throbbing, seriously beautiful "Loving You" (heartbreak dressed in a luxurious bathrobe on the deck of a yacht at sunset), you may wish for an outside producer to rein in some of Wilson's aural excesses. They might also want to have a quiet word about some of the lyrics: the gorgeous melody (Wilson really is putting some elbow grease into the tunes here) of "49 Hairflips" (with Josh Tillman on backing vocals) is somewhat disfigured by an opening verse that starts with unpoetically blunt descriptions of certain physical activities and concludes with Wilson mourning that social media addicted ''kids will never rock again''. There could be room for some judicious pruning as well: the Beatles/ELO pastiche whimsy of "Miriam Montague" in particular seems like lightweight fluff next to sore emotions on display on the stronger material.

Although Wilson's stressed this is not a conceptual ‘break-up’ album, it's hard not to notice that the album's contents seem to chart the course of a relationship from the initial meeting (on the impossibly lovely, piano-driven, wearily swooning of "Sunset Boulevard") to the lonesome introspection of the traumatic aftermath (in the same song, actually), albeit with an erratic take on chronology. Real or imagined, the heartbreak has obviously moved Wilson to push his songwriting further. Whereas the less memorable bits of 2013's Fanfare and 2011's Gentle Spirit suggested Wilson might be more accomplished as an arranger and assembler of sounds and concepts than as an author of memorable songs, Rare Birds is practically bulging with strong material. It’s telling that the album’s strongest moment – the desolately soaring closer “Mulholland Queen” -is also its least densely ornamented: on this form, Wilson’s songs require no extra polish or decorations to compel. Despite its flaws, Rare Birds is a rare find.