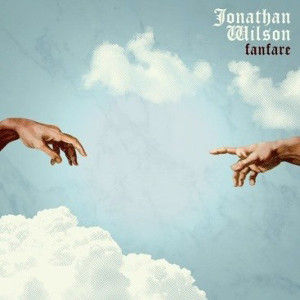 At first, Fanfare suggests that Jonathan Wilson has lost the plot. Having revived the laidback, jam-friendly, free and easy spirit of the creative peak of West Coast singer-songwriterdom (circa 1971) on celebrated 2011 debut Gentle Spirit, this second solo album appears to fast-forward to that awkward spot in his legendary heroes’ musical journeys where weed, wine and song give way to class A’s and lawyers, budgets stretch into figures close to small countries’ GPDs, and band members drop into studio individually to record hour upon hour of showing-off in a vain attempt to divert attention from the fact that inspiration has left the building.

Fanfare truly is an unashamedly grand affair. From an opulent string section and honking sax to disembodied laughter and bells, the three-minute intro to the title track chucks in so many ingredients that you literally expect to hear the clang of the kitchen sink landing at any moment. When the piano enters the lavishly painted picture, you are in no doubt whatsoever that it’s a white grand parked in the ballroom-sized front room of a seaside mansion. By the time the drums pummel in like particularly ponderous thunder-cracks you wonder whether it might all be a conceptual joke, a painstakingly constructed ( 60′s/70′s soft-rock legends David Crosby, Graham Nash and Jackson Browne aren’t merely inspirations to various parts of the album, the trio also contribute silky-smooth backing vocals to many a track) tribute to the inspiration-sapped, bloated dross that emerged at the sorry end of the hippie dream that Wilson’s Laurel Canyon-dwelling spiritual forebears famously soundtracked.

Thankfully, Wilson loves the music from what he calls the ‘golden era’ (1967-1975, preferably with strong links to California) far too much to resort to such smirking hipster nonsense. Get over the initial confusion, initiate yourself with the seemingly endless array of ingredients, and the initially overwhelming abundance of detail starts to make glorious sense. Fanfare emerges as a strong tribute to the kind of lavishly musical, technically adept, sincere stuff they rarely attempt these days at risk of being laughed at. It’s a sign of the album’s accomplishment that it’s often a more charming listen than its influences. Pink Floyd’s 70′s epics and Beach Boy Dennis Wilson’s solo epic Pacific Ocean Blue have been cited as touchstones, but Fanfare, for all its obsessive attention to detail, packs a whiff of anything-could-happen looseness that such slick inspirations show little interest in. Initially rambling and overlong, a patient listener is bound to discover that most of these 13 tunes are much meatier and better-realised than most of Gentle Spirit. Busy touring, meanwhile, has turned Wilson into a much more confident and expressive singer. It’s easy to calculate the duration of the musical interludes and write the whole thing off as a muso noodle-fest, but you can’t negate the passion, heart and warmth involved in, say, the frantic jazz-rock guitar-off at the end of the beautiful waltz “Dear Friend” or the superb blend of piano balladry and The Band-influenced country-funk of “Lovestrong”: Fanfare might be an intricate, luxuriously layered totem to supreme musicianship and studio wizardy, but it’s far from slick or soulless. Consisting of discrete movements that somehow fall perfectly into place, the album’s lengthy cornerstones deserve to be described as suites, highlighting Wilson’s increasingly tight grip on songwriting: with so many ideas to dispatch, there’s little time for the idling that marred the less successful parts of Gentle Spirit.

As good as the full-on epics are, Fanfare is often at its best when the layers of sound are scaled way down. The sparse (relatively speaking) “Cecil Taylor” is spellbinding, a jazz-tinged folk-rock workout built on fingerpicking, percussion and voices that brings to mind the lost classic that is If I Could Only Remember My Name by David Crosby (who, alongside CSN buddy Graham Nash, provides startlingly beautiful harmonies) and the more bleary-eyed contemplations of Bella Union labelmate Roy Harper, whose excellent ‘comeback’ Man and Myth Wilson produced. Moving from near-muted strums to a folk-funk coda, “Her Hair Is Growing Long” is almost as potent, whilst the wistful “Desert Trip” and “New Mexico” (lyrics by Harper) go some way towards muting the suspicions that, for all his accomplishments, Wilson might remain more accomplished as a producer and arranger than as the writer of genuinely memorable songs.

It’s not without its faults. Having toured with Neil Young & Crazy Horse, you would have thought Wilson had noticed that the chords and melody of “Illumination” replicate the legendary combo’s 1975 classic “Dangerbird“. The track also proves that Wilson’s love of open-ended noodling can lead him astray: what works well for four minutes isn’t always even better if stretched to six minutes and beyond. It’s hard to shake off the sneaking suspicion that instead of 13 tracks, the ideal length for Fanfare might have been the classic vinyl album consisting of 10 tracks, especially as the easy-rolling country-rock of “Love to Love” (reminiscent of Tom Petty and the Heartbreakers, some whom contribute to the album, and sometime collaborators Dawes) and ‘Moses Pain’ (faint whiffs of Dylan, on the one track here that would have fitted easily on Gentle Spirit) sounds almost disappointingly direct and derivative next to the multipart opuses that dominate Fanfare, which, for all their traceable influences, sound remarkably fresh and one-of-a-kind.

Even so, Fanfare deserves a round of applause for taking a fearsomely retro concept (album as a mega-budget, widescreen statement) and, rather than sinking waist-deep into pointless pastiche or a rehash of vintage mistakes, ending up with a piece of work that would have been remarkable had it been released during the era it emulates, and which sounds remarkably ‘now’ today.