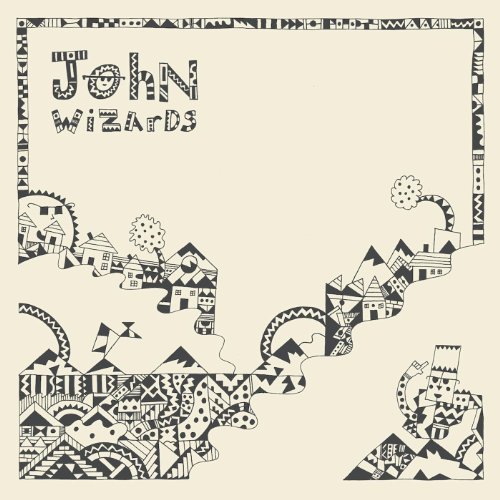 John Wizards is a duo made up of John Withers, a white, South African songwriter and musician, and Emmanuel Nzaramba, a black, Rwandan vocalist living in Cape Town. The two met while Nzaramba was working as a car guard outside a coffee shop that Withers frequented; Nzaramba saw that Withers had a guitar and the two started talking music. The band’s origin story is strikingly similar to The Very Best’s, albeit in an entirely more racially fraught environment.

While talking about the rarity of black and white South Africans playing in bands together in an interview with Pitchfork, Withers said “you don’t want to use an African singer just because you want something to have an African vibe.” John Wizards avoids that pitfall on its self-titled debut. The album is distinctly African, but it’s also clearly influenced by Western indie rock and a million other kinds of music. It’s wholly unclassifiable, a wild mix of styles that approaches sui generis, an ebullient stream of different genres, instruments, melodies, sometimes all within a single song.

The album starts with ‘Tet Lek Schrempf,’ a gentle, repetitive keyboard melody that morphs into a cheap synthesizer fanfare and then just as quickly to a stomping conch shell interlude and then again to a squealing guitar riff. On first listen it’s shocking and audacious sounding and the parts seem a little incongruous. After you hear it a few times it all starts making sense ,but still the song feels no less audacious. The album moves to the lilting, African synthpop of ‘Lukasa by Night,’ the album’s lead single. It’s one of several moments on the record, including ‘I’m Still a Serious Guy,’ a gorgeous mix of reggae and Ezra Koenig-esque phrasing, where you can hear the sound of Vampire Weekend (an avowed influence) filtered back through African pop. Nzaramba has a handsome, clear voice and he sings in his native Kinyarwanda. On ‘Lukasa by Night’ his voice drips with autotune but on other songs, like the mellow tropicalia of album closer ‘Friend,’ the vocals are just as affecting when left unmodulated and plain.

Each song on John Wizards surprises in the way it combines familiar elements in unfamiliar ways. ‘Muizenberg’ moves from chamber pop vocals to a scuzzy guitar riff. ‘Finally/Jet Up’ starts with a meditative, almost ambient opening and ends up at a sped up climax that recalls Disclosure. ‘Maria’ is a pretty love song highlighted by a recorder part. Even when the band plays it relatively straightforward the the details are original enough to keep you engaged. ‘Jamieo’ marries an R&B backing track with deeply understated vocals. ‘iYongwe’ is chintzy 80’s funk with an incessantly repeated melody that would be irritating if it weren’t so catchy. Synthesizers are the one constant – Withers employs the instrument for everything from the sunny, childlike melody of ‘Lushoto’ to a house sound on ‘Durvs.’ The band also uses rhythm, even as it shifts, to smartly tie together a song’s different parts.

John Wizards, for all its strengths, is not an album that is easily digested and enjoyed. Its stylistic diversity can be off-putting at first. But the more you listen, the more it all comes together. And it’s worth listening enough to get to that point, because the band has created one of the more unique and refreshing debuts in recent memory.