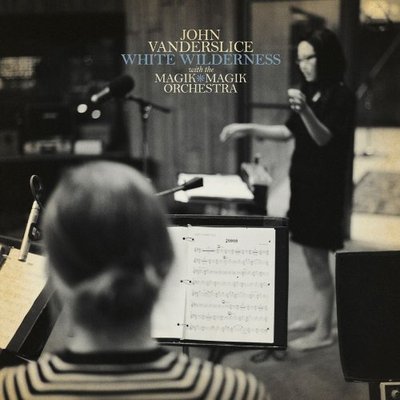 The American-led invasion of Iraq in 2003 and a series of foreign misdemeanours left many deep scars among its own liberal community.  One of them, John Vanderslice, used personal and political songs on his brave 2007 album Emerald City to make sense of the events and deal with the depression and shame many Americans feel about the actions of their government.  But John Vanderslice’s hard-earned reputation as the songwriter’s songwriter has come at something of a price.  The San Francisco artist has notched up a steady stream of albums in the last decade, songs with a strong narrative, occasionally rather quirky and obtuse, usually combined with an intricate multi-layered musical approach in search of the perfect musical arrangement. Yes, in short Vanderslice has been tinkering in his Tiny Telephone recording studio since 1999, but the slavish attention to detail may be getting in the way of the music.  Response to his last album, 2009′s Romanian Names, was somewhat muted, one reviewer commenting rather unkindly it sounded like … erm, just another John Vanderslice album.

So White Wilderness marks something of a departure, recorded over just 3 days in a series of live recordings with The Magik*Magik Orchestra, classically-trained musicians also from the Bay Area of San Francisco, led by Musical Director Minna Choi.  Gone is the multi-layered approach, but the orchestra have brought a nice range of textures and colours to the music and allowed the whole album to breath a bit.  The results are very pleasing indeed, particularly for Vanderslice himself, emerging from behind the studio trickery to bare his soul to the world.

Album opener and promotional single ‘Sea Salt’ gives us a flavour, the song moves something like ‘Pennyroyal Tea’ on Nirvana Unplugged, and Vanderslice obliges us with a Cobain-like warble while the orchestra add some nice tinkling piano and sparse string accompaniment.  This understated approach sets the tone for the rest of the album, but blink and you might just miss how good Vanderslice’s words are:

Poetic leanings continue in ‘Convict Lake’ followed by the beautiful and bewitching title track, where a “twisted trail” in the snow between 2 lovers comes to nothing.  Again, you can’t help marvel at how the lyrics and accompaniment evoke what can only be a wintry stroll, but the song carries some dark twists and Vanderslice’s cracked vocal is also a masterstroke, delivered with something like the fragile beauty of Dennis Wilson on his classic 1977 album Pacific Ocean Blue.  The orchestration is eerily beautiful, I doubt you’ll hear anything more lovely this side of the spring.

Tempo is everything on White Wilderness, as Vanderlice and the orchestra gently vie for attention.  On even-paced ‘The Piano Lesson’, the latter takes centre stage with pizzicato strings giving the song a playful spikiness, while warm woodwind and sax engage with fluttering ‘ah-ahs’ provided by Choi and the others. Vanderslice’s voice is softer and gentler, with a cinematic quality redolent of Al Stewart’s classic 1976 album Year Of The Cat, but then drops back on the next song, the acoustic guitar-driven ‘After it ends’, before picking up the pace again for the rather majestic ‘Overcoat’, orchestra and artist now in full throttle.  This seesaw approach works well throughout the 32 minutes of White Wilderness, the relative brevity giving it something of a timeless quality, like an old 33rpm from the 70s … Moody Blues, The Kinks, Procol Harum … Perhaps the experience of a bygone era which Vanderslice wanted to re-evoke in the listener.  Final track ’20K’, rather like Procol Harum’s ‘The Salty Dog’, is rich in orchestration and tales of the sea.

I’ve always found Vanderslice’s music easier to like than to love, but on White Wilderness the penny finally dropped.  Start with the words of a great poet and narrator and get a sense of where he wants to take the song.  Allow a very capable bunch of musicians the space to sketch melody around the ideas and breath life into them.  Finally, add the cracked fragile beauty of a voice unencumbered by studio affectation.  Listen to a song like ‘English Vines’, or indeed the title track of White Wilderness, and suddenly you get it!  The artist changed his modus operandi, but this listener also found a better way into the songs. So for me, another brave move from the artist and not just another Vanderslice album, a fresh-sounding blend of chamber music and off-kilter 70s flavoured pop.  But I’m warning you, blink and you might just miss it!