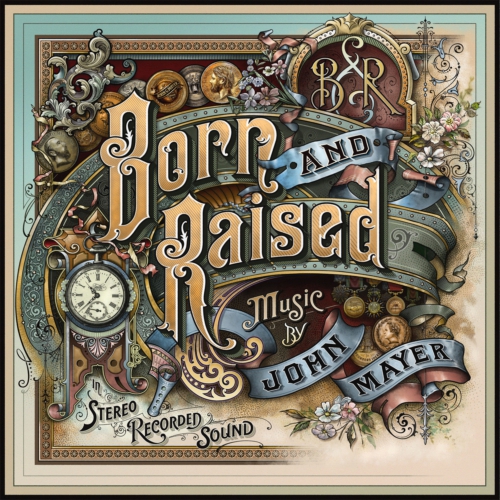 John Mayer made no secret of his intentions from the outset of his career: start with an album filled with emotive radio singles and play what he really wants later. Ever since his uber-popular debut, his plan has worked to perfection. The large fan base he was able to quickly establish on the strength of ‘Your Body is a Wonderland’ type singles gave him the creative and financial freedom to call his own shots. From there, fans waned and sales dropped to some degree, but Mayer remained quite happy moving back and forth between pop, rock, blues and back again. The John Mayer Trio indulged the inner guitar hero while Continuum blended his influences well. Now, Mayer’s latest continues the trend with his most “down home” effort yet.

Fittingly titled Born and Raised, the album sees Mayer singing openly about his parents and America. Co-producer Don Was knows a thing or two about warm production from his work with Willie Nelson, Lucinda Williams and Elizabeth Cook among others, so the album is in very capable hands with such material.

Harmonies and harmonica abound throughout, and the entire affair is Mayer’s most tender, poignant album to date. The resonant piano on ‘Love is a Verb’ is particularly affecting, Mayer’s simplistic acoustic arrangement working surprisingly well. The storytelling on ‘Walt Grace’s Submarine Test, January 1967’ works in the same way, as Mayer turns the incredible tale of a “one man submarine ride” into the most beautiful song on the album. It’s a track that begs to be heard.

Mayer’s albums often include a track or two offering straightforward yet heartfelt advice (such as ‘Daughters), and ‘The Age of Worry’ is definitely written in the same vein. Mayer dispenses like a commencement speech throughout the verses before introducing a refrain that reads, “Love in the age of worry/Rage in the age of worry/Sing out in the age of worry/And say, ‘Worry, why should I care?’” On paper the words can sound trite, but Mayer has developed a knack for turning such phrases into million-selling tunes.