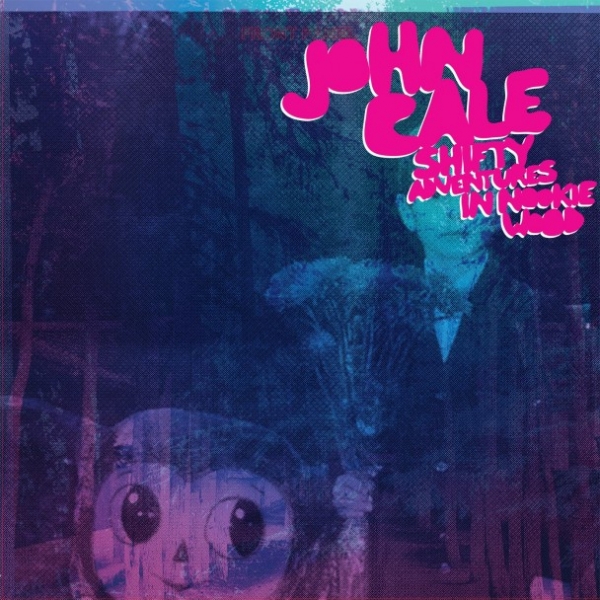 “I heard you whisper in my ear that you were coming back this year.”

If you’re expecting another Paris 1919, you’re going to be disappointed. Ditto Fear or Slow Dazzle. If you still want to hear a man with a pageboy haircut clawing away at his viola, telling stories about men in boxes, you may as well click away now. If you enjoyed last year’s extremely poppy Extra Playful - an oddly lightweight, deck-clearing EP which very much lived up to its title – then the vital and ever-questing sound of the John Cale of 2012 (now with added OBE and shocking pink soul patch) will appeal to you in spades. Put simply, Shifty Adventures in Nookie Wood does not sound like the work of a man content with a regular place in your favourite heritage rock rag after fifty years in the game.

Cale’s fifteenth album is unlike most of his previous work. That much goes without saying. There’s less of a reliance on traditional rock and roll instrumentation, and while there’s sonic experimentation to be found here, it’s all done to serve the songs and the atmosphere rather than to push the envelope for the sake of it. The main thing to say is that Nookie Wood is full of beats, loops and synths; not in an embarrassingly dilettantish way, mind. Following a deceptively simple acoustic introduction, it’s certainly a surprise to hear Cale swagger his way through the Danger Mouse-produced minimalist funk jam which opens the record (and is given the Prince-ly title ‘I Wanna Talk 2 U’), but once that’s over, it’s impressive just how quickly he settles into this new sound.

Across the record, even if the sounds aren’t recognisably his, there’ll always be a classic Cale lyric (current favourite: ”I’m trying to keep the noise down with a knife in my gut”) or a weird little production twist (like, say, the convulsive polyrhythms that don’t quite match up in ‘Vampire Cafe’) to wrench you back in. And, thankfully, his melodic flair is completely intact; Cale’s vocals soar over the spartan, droning dreamscape of ‘Living With You’, while the pulsating ‘Scotland Yard’ makes for an early highlight. The pace doesn’t really pick up across the record, so a run of twelve pretty mid-tempo tracks may lead a few people to instinctively tune out after a while; however, regular visits to Nookie Wood will leave you with a map of the album’s elliptical landscape embedded in your brain.

The music on Shifty Adventures in Nookie Wood fits both its spooky title and warped (and oddly Atlas Sound-like) artwork. It’s a nocturnal, autumnal beast – an aural askance glance, commandeered by a seventy year old Welshman who shouldn’t really know what autotune really is, yet alone use it so damn liberally. It’s a suitably restless-sounding record for an OAP who can get away with working with fucking Danger Mouse. Cale doesn’t sound at all lost or foundering, as he has been accused of on many of his more recent records; this is a mood piece of epic proportions. While Lou’s idea of experimentation is making a record with Metallica and reluctantly churning through the hits, and while Mo remains content to raise her banner high for the Tea Party, we can all rest in the knowledge that John Cale has just entered yet another purple patch of his long and varied career. These Shifty Adventures are yet more proof that the coolest member of The Velvet Underground has still got it.