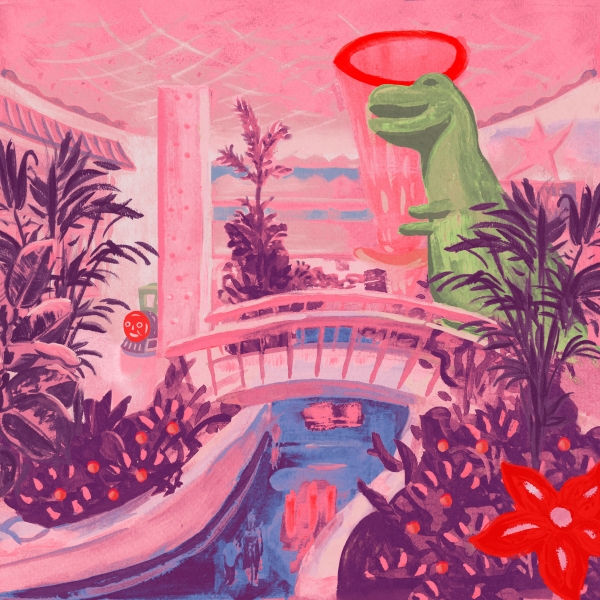 Jacob ‘Jerkcurb’ Read makes music for sleepless nights. A stalwart of South London’s lo-fi scene, his romantic, nostalgic songwriting is streaked with surreal imagery and woozy surf guitar. His debut album is best listened to in a dimly-lit bedroom, whiskey in hand, TV blaring ‘70s gameshow reruns in the background.

On Air Con Eden, Read evokes memories of a bygone America and warps them into beautiful fever dreams. “I eat my dinner all alone / Roast chicken for one”, a woman half-sings over heavenly Mellotron chords on “Wishbones”, a macabre love story that conjures images of cherry pie and pastel-pink laminate. The lulling title track meanwhile beams us back to the heyday of shopping malls. Worrying about wasted time (“The quickest summer of my life just flew by”), Read retreats into visions of lush indoor gardens and ornate water features: “I'll be in my air-conditioned Eden / Where the seasons never change”.

As Read drifts deeper into these flights of fantasy, malaise creeps in. Like “Air Con Eden”, “Aquarena Springs” unearths a relic of classic Americana – a mid-20th century Texas water park – though this time it serves as a cruel reminder of the ravages of time. The sound of a jacuzzi bubbles beneath a lethargic guitar as Read looks back at a relationship with melancholy. “Do you remember the flowing water… In Aquarena”, he sings, while archive recordings of local newscasts about the park make us long to return to a place we’ve never been to.

On “Somerton Beach”, Read recounts the real-life mystery of an unidentified man who washed up on an Australian beach in 1948. He contrasts the mundane and supernatural to chilling effect, describing a “stranger in a suit and tie” who follows him “straight from beyond and into my soul”. Finger snaps and dark, reverberating guitar tones underscore the obvious Twin Peaks connection.

Most of the songs on Air Con Eden are enveloped in this haze of hallucinatory imagery and soporific instrumentals. The wrenching “Water” is a shock to the system. Grounded, unironically sentimental, and unlike anything else on the album, it’s a gorgeous piano ballad about unbearable loneliness. “The glass is half empty,” Read sings lethargically over tense strings. “The glass is half full,” he amends, repeating the words as the familiar tone of his guitar re-emerges, slipping us back into his wistful, Lynchian dreamscapes.