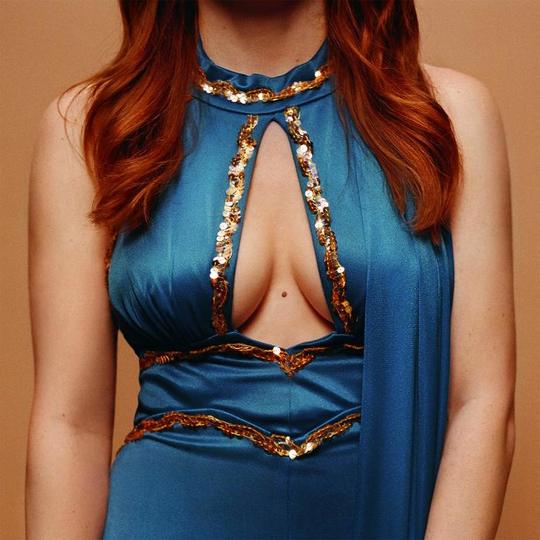 For a generation of indie rock artists, Jenny Lewis has assumed a mythical status.

Her influence on Waxahatchee and countless others is clear; her honesty, warmth and melodic savvy made young women feel like it was OK to be their unguarded selves in their songs, and Lewis's penchant for taking her time between albums has only helped to increase her status as the figurehead for certain types of songwriter. On The Line is her first album in half a decade and is the first time she's made an audible attempt to honour this adulation.

Its predecessor, 2014's The Voyager, was arguably the best album to bear her name since Rilo Kiley's 2002 breakthrough The Execution of All Things. Arriving after another long gap, around the same time as HAIM's similarly sun-soaked debut, it's a masterfully classic Cali pop record which nodded to many classic members of an impressive songwriting lineage. With an LP designed to resemble the classic Warner Brothers label that once adorned albums by James Taylor and Fleetwood Mac, the rainbow-splattered album was breezy but never throwaway, always succeeding on its own terms.

You can tell from the first 30 seconds of opener "Heads Gonna Roll" that On The Line isn't going to be quite as carefree. Picking up where The Voyager's closing title track left off, it's a stately piano-led ballad, bolstered by gargantuan-sounding drums courtesy of Ringo actual Starr. Elsewhere, you can hear the work of seventies session legends like Tom Petty keyboardist Benmont Tench, and Bob Dylan/Carly Simon drum master Jim Keltner.

But while these names are impressive, they're also a distraction; there isn't a second where On the Line is anything less than 100% Jenny Lewis's album. Lead single "Red Bull and Hennessy" is equally a liberated statement of intent and a cruising-with-the-top-down anthem. Likewise, although it occasionally slips a little too close to "Knockin' On Heaven's Door" for comfort, "Hollywood Lawn" is the kind of gorgeous deconstruction of Los Angeles emptiness that only she could write.

However, On The Line relies too heavily on its glut of mid-tempo tracks, which occasionally sound like an all-too-conscious leap towards the pantheon, leaving even Lewis's most soul-bearing lyrics a little toothless. On paper, "Dogwood" might be Lewis's most devastating lyric, but its crushing break-up saga ("I was determined to work it out, I never told you I had my doubts") is washed away by its lifeless gospel plod. "Taffy"'s close-miked confessional and the timeless pop sound of the title track belatedly bring some life back into the album, but for all its grasps at greatness, On the Line simply doesn't deliver as often as it wants to.

Still, as "Rabbit Hole" - a deceptively nursery-rhyme-like ode to heroin withdrawal - brings the album to a close, it's hard not to think that, despite some of the record's surface disappointments, you'd still follow Jenny Lewis down time and time again. She's proved herself by sticking around, appearing when her music is most needed, and inspiring people all over again. On The Line may not be her strongest work, no matter how much it aims to be but it proves that Jenny Lewis doesn't need to try too hard to become one of the greats. She's already been one for a while.